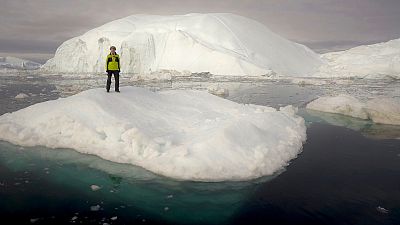 Climate change is making Arctic waters more accessible to vessels, raising the controversial prospect of more industrial-scale fishing. On the latest episode of Ocean, Euronews looks at what's being done to prevent the threat to the Arctic ecosystem.

Greenland is warming. Among other things, this means longer fishing seasons. Between the icebergs of Ilulissat, it’s a gold rush. Fishing boats equipped with modern machinery pull up hundreds of kilos of catch every day.

“There’s too much fishing going on around here. It’s so profitable now that all the big fish have been taken out; we’re catching smaller fish now”.

To be closer to buyers, fishermen are moving from coastal villages to cities. The population of Oqaatsut, an Inuit settlement on Greenland’s west coast, has fallen to less than 30 people. Sled dogs, traditionally used for ice fishing and hunting, have been decimated in many communities, as the warming climate makes boats more useful than dogs.

”The sledding used to start in October," says Oqaatsut fisherman Steen Gabrielsen, "but now that there’s not enough ice, we can just use boats all year round.”

As the seas get warmer, new species of fish are finding their way to Greenland’s coasts — these include mackerel, herring, Atlantic bluefin tuna and cod. But not everyone is happy. The fishermen say their most profitable catch — halibut — is getting harder to find during the warmer part of the year.

“Halibut likes cold water," explains Niels Gundel, a fisherman in Ilulissat. "As summers become warmer and longer it moves away, to stay where it’s cool.”

In the future, retreating sea ice and changes in fish stocks could bring commercial fishing fleets into the unprotected international waters around the North Pole.

Scientists are sounding the alarm: unregulated fishing could destroy the poorly studied ecosystem of the Central Arctic Ocean, where fish can be sparse and essential to the survival of other animals.

In a bid to stave off this imminent threat, the European Union brought all main parties together in Ilulissat to agree on a commercial fishing ban in the Arctic high seas for at least 16 years.

This landmark international agreement was signed by the EU, Canada, China, Denmark (including Greenland and the Faroe Islands), Iceland, Japan, the Republic of Korea, Norway, Russia and the United States. Together, these parties represent some 75% of global GDP.

Under this legally binding agreement, the Central Arctic area - roughly the size of the Mediterranean Sea - will remain off-limits for fishing fleets, at least until scientists confirm that fishing in the region can be done sustainably.

At the Arctic University of Norway in Tromsø, Professor Tore Henriksen heads the Norwegian Centre for the Law of the Sea.

“This agreement is reflecting the precautionary approach, that when you have little or very inadequate information you should act cautiously and only regulate, and adapt the regulation, according to the information you have," Professor Henriksen explains. "Previously, you started fishing, and then you regulate it. And then at that stage, it could be too late.”

The future of the ban will depend on the findings of the scientific consortium led by professor Pauline Snoeijs Leijonmalm. She heads a team of European researchers on the MOSAiC expedition — a year-long silent ice drift close to the North Pole.

“Normally, when the icebreaker moves through the ice, you will not get good acoustic data, because there’s too much sound from the icebreaker. Now we’ll have a whole year of acoustics, and it is just a dream!”

As well as using sonar, the EU-supported researchers will record videos with a deep-water camera, take environmental DNA samples at various depths, and for the first time catch some Central Arctic fish.

“We will be able to analyse its stomach, its stable isotopes, its fatty acids," Professor Leijonmalm says. "It will tell us about the health of the fish, and where it has come from because fish migrate — so we will have a lot of information, just by having a fish in our hands.”

The discoveries of this and future expeditions will determine whether fishing in the Central Arctic Ocean can be done sustainably — or whether these high seas should remain untouched for the decades to come.

To watch the full episode of Ocean, click on the media player above

Scientists have embarked on the longest-ever expedition to the Arctic