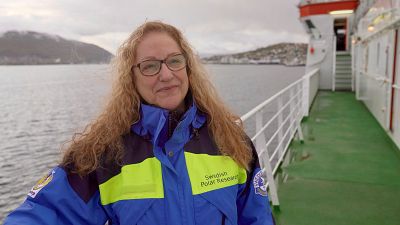 An international agreement signed in 2018 preventively banned all commercial fishing in the Central Arctic Ocean — long before any fishing could realistically begin. Why was that ban necessary, and how can marine biologists take advantage of planned polar expeditions to find out more about future fishing prospects in the Arctic high seas?

Dr. Pauline Snoeijs Leijonmalm, Professor of Marine Ecology at Stockholm University, talked to Euronews hours before leaving Tromsø, Norway onboard the Polarstern icebreaker for the MOSAiC expedition at the North Pole.

She began by explaining why we need a fishing ban in the region:

Once the ice disappears, there could be a rush to fish the area, which lies outside the exclusive economic zone of the coastal countries

“So that’s why we need to know now what we have in this sea that perhaps can be exploited by anyone," Professor Leijonmalm explains. "And of course, we need protection for this area. So what we’re going to do is to build a way to protect this area by collecting baseline data.

“We are at the very beginning of this. What we are doing is now mapping, and this is the first expedition that’s going to map. And the big advantage of connecting to such a big expedition is that we get all the environmental data from the ship’s program — so we do not need to measure the chlorophyll ourselves, or the nutrients, or not even the zooplankton. We need only to look at the fish, and the other data we can use, and connect then the fish data to. So that’s a very big advantage of these big expeditions.”