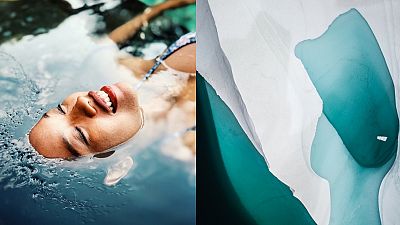 Ah, the summer heat! We long for the sun yearlong yet as soon as the temperature goes beyond 30°C, city life gets too ‘hot to handle’. Commuting to work becomes an adventure comparable to a hot sauna- like experience. With last year marking the hottest summer in the UK, it is time to start looking for alternative ways to fight the heat wave. Wellness to the rescue. One of world’s fastest growing industries, the wellness sector is now worth over $4.2 trillion globally. As this niche of the economy is booming, the drive to be ‘cool’ is also gaining popularity. Don’t believe the chill hype? Even Spotify named ice baths and cryotherapy as the top growing trend among its 43.5 million workout-themed playlists in 2018. Summer’s hottest wellness trends are best served cold.

Cryotherapy: a variation of a high-tech ice bath

A variation of a high-tech ice bath which claims to help us stay young, fit and healthy? Professional athletes have been using ice to treat injuries and reduce inflammation for years (if not centuries!) but the idea of voluntary stepping into an icy chamber has come into fruition and gained popularity only in recent years.

Not only Hollywood A-listers like Justin Timberlake, Floyd Mayweather and Jennifer Anniston are reported fans- the concept has recently being picked up even by the US military. Get your gloves, thermo socks and ear protectors on as you’ll be chilling in a temperature cooler than the coldest place on Earth.

Just three minutes of the exposure to around minus 100°C freezing air forces your body into a critical state. Xavier Lagache from cryo studio ‘Chalet Cryo’ explains: ‘The ice-cold shock will trick your body in transporting oxygen rich blood away from your limbs to protect your key organs. Once the treatment is done and the body resumes normal state the re-oxygenated blood flows back into the muscles’.

The process prompts the release of healing benefits to speed up recovery and fight inflammation. A 3-minute cryotherapy session not only promises to accelerate weight loss by burning up to a few hundred calories but claims to have a positive effect on metabolism, sleep, increase collagen production and reduce inflammation. While studies are as new as the treatment itself, cryotherapy is to be the wellness statement this summer. ‘The demand has been constant since we opened, especially popular with the nearby office crowd’, adds the founder of the studio. It takes less than 20 minutes from the moment you enter the cryo studio- fast-fix lunchtime treatment that will at a minimum leave you feeling refreshed, energised and well equipped to brace the heat outside.

A fan of cool outdoor workouts? Other than purely refreshing, some studies have found that a workout in the cold is more effective not only because it burns more calories, but also because it increases your performance. While you won’t find a shade that’s cool enough to test the concept during summer, working out in the cold has already been picked up by the fitness industry.

Worlds’ first boutique cool temp fitness opened in New York in May 2018, giving a whole new meaning to ‘feeling cool when working out’. Brrrn’s signature classes (including a pilates inspired cardio class on slide boards!) are done in temperatures ranging from minus 7°C to minus 15°C.

Founders’ Jimmy and Johnny have gathered carefully researched ‘cold hard facts’ as a point of reference which can crush the doubts (get it, icy?) of heat lovers and pessimists. One of which suggests cold acts as a ‘natural stressor to the body, causing it to react’. The duo references pieces of the studies done by former NASA scientist Ray Concise on the benefits of the cold and looks up to him as ‘the father of their cold movement’.

Can working out in ‘The Fridge’ (symbolic as the founders’ first cool workout test did take place in an actual 3°C beer fridge) speed up weight loss and give you an extra energy boost?

‘We have many ‘Brrrners’ who have lost noticeable weight, largely due to the fact that they are able to work harder for longer’ notes Jimmy Martin. He refers to heat as a limiting factor in a workout experience and claims although very popular in summer, the concept has been well accepted in the winter months as well. Other than associated with a more productive workout, sweating in the cold is also well..purely refreshing.

‘In terms of performance, the feel of betterment is almost instant. I think people are most surprised with how reinvigorated our workout environment is’. While being environmentally conscious too – LED lamps and reclaimed wood as sustainability is of vital importance to BRRRN.

‘We look forward to improving and thinking strategically about how we can make every aspect of our operations sustainable.’ Can there be ever a time for a ‘freeze’ out? Jimmy admits most people visit the studio 2 to 3 times per week but if you are too sensitive to the cold, a beanie and gloves may be more appropriate. The founders believe the ‘cool’ trend in wellness to be very positive and say that are ‘happy that cold is now being seen more as an ally rather than an enemy’. Feel cold to look hot as BRRRN plans to open more locations upon receiving its patent. London not excluded.

Superficial or not, women in Britain are spending more than ever before on facial skincare. Other than a predicted £1.18 billion spend in 2018, luxury facial skincare brand launches take the dominant market share at 71% - talk about a ‘treat yourself’ mindset.

Understandable then, that one of Hollywood’s statement facials which pioneered at Beverly Hills a few years back has kept up on demand. With a hint of frost. If you are a frequent salon goer, you know how limiting the summer sunshine is with approved facial treatments. Nothing too skin deep allowed.

This is where Fire & Ice comes in – a midpoint between a mild facial and an invasive peel. Made up of a resurfacing masque (sugar cane extract, retinol) aka ‘the Fire’ and a rejuvenating masque (hyaluronic acid, Aloe Vera, Green Tea) aka ‘the Ice’ it is claimed to be a ‘miracle’ treatment which promises a clearer and plumper skin.

It exposes your skin to a combination of two contrasting sensations- the heat (which may cause a slight burning), followed by the calming ‘icy’ feel. Founder of Dermadoc Clinic, Dr Firhaas Tukmachi, confirms the Fire & Ice facial is one of the most popular treatments in summer due to its ‘non-invasive nature and the requirement of zero to none downtime’.

For optimal results, he recommends doing it not more often than once a month and still advices to plan it a few days prior to your sunny holiday escape. When asked whether the cold does stimulate collagen production, Dr Tukmachi admitted this claim is not backed by medical evidence but added some studies have shown fat reduction and collagen stimulation from actual cold therapies (such as cryotherapy). The verdict on ‘Fire & Ice’ -you may not be 100% ‘red-carpet’ ready instantly, but the treatment will for sure leave your skin feeling cool.

As the name suggests this treatment claims to be able to mould the body under controlled cooling. More accurately eliminating stubborn fat areas through localised freezing. ‘The idea that cold can target fat cells, without damaging the skin or surrounding tissue was the insight behind cryolipolysis, the science on which the CoolSculpting procedure is based’, explains Dr Rakus from Dr Rita Rakus Clinic.

The treated area starts off with a cooling sensation, followed by a slight burning to leave you numb. ‘The fat cells are frozen to destruction and eliminated through lymphatic drainage, continues her colleague Dr Galina Selezneva. She also notes that while heat has been used for a while, the use of cold has revolutionised non evasive fat reduction in the last few years.

Can anyone have it done? Not if you don’t have clearly defined areas of ‘grabbable fat’ as the specialist continues to explain. At my 47 kg, I did not pass the test. But even if you do, you may still not meet the selection process. ‘If you are obese or overweight, then CoolSculpting will not work for you. It is a trimming treatment that works best for a few extra pounds of fat’- suggests Dr Rakus herself.

Although considered to be amongst the safest non-surgical treatments with a clear fat reduction effect, be warned you may not be able to share your new results with a wide audience straight away. For one, they will not be visible until a few weeks later and you may experience some bruising on the post-frozen areas. Most popular areas include abdomen, inner thighs and arms. The specialist notes that follow up treatments should not be done earlier than in three months’ time, otherwise ‘you risk creating a damaging effect to the already treated cells’. The ‘cool way to fine tune’ your figure but in moderation.

Beat the heat: 5 eco-friendly deodorants you need to try