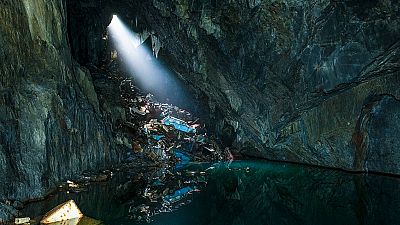 We pour one ton of plastic into the sea every minute. It’s millions of soda cans, plastic PET bottles, empty cigarette packs and loose sandwich wrappings not to mention 30 billion cigarette butts thrown on the floor every year. A large part of this waste transits through rivers and ends up in oceans where it aggregates at crossroads of marine currents to form giant “plastic soups”.

American navigator Charles Moore was the first to discover one of them in 1997. Located halfway between Hawaii and California, what we now know as the “Seventh Continent of Plastic”, the “Great Pacific Garbage Patch” or the “Pacific Trash Vortex” is at least as big as Portugal, Spain, France, Italy and Germany together.

It continues to grow exponentially which shouldn’t come as a very big surprise given that among the 300 million tons of plastic we produce every year (versus 1.5 million in 1950) between 10 and 30 million will share the same aquatic destiny.

Concerned by this alarming situation, a majority of European parliament members supported a new law banning single-use plastic - such as cotton buds and plastic cutlery, plates and straws - last October. These relatively small items represent 70% of rubbish currently found on beaches and oceans. But politicians are not the only ones taking actions.

A few years ago, Swedish joggers, tired of running into garbage in parks, squares and sidewalks, invented a very strange sport: Plogging, a contraction of plocka upp (Swedish for ‘picking up’) and the word ‘jogging’. The concept: to take advantage of a weekly run to pick up trash found on the way. The newly-invented discipline found success quite quickly. Today, a bunch of ‘plogging clubs’ are opening, not only in Sweden but all over the world.

What is ‘Plogging’ and how does it work?

First, every plogging session starts with the appropriate equipment. You will need a backpack, a pair of rubber gloves, a transparent garbage bag and if you’re a member of a club, a printed tee-shirt to let passers-by know what you - and these other strange people - are exactly doing.

You’ll quickly discover that plogging is as good for the planet as it is for your figure, for it trains every muscle in your body. Every time you stop to pick up some trash on the ground and start running again you’ll be doing what the pros call “interval training”.

You will work on your abs and your glutes every time you bend or squat to catch a piece of garbage. You’ll do flexions too, and you’ll definitely develop the muscles in your arms whilst carrying the (enormous amount of) collected trash. ‘Plogging’ ends up being much more physical than a regular running session.

‘Plogging’ is also very good for the mind. Not only it encourages socializing with other ‘ploggers’, but it also sparks compliments as random people in the street will throw some “Thanks” and “Bravos” at you as you plog, your garbage bag in hand. The powerful relaxation induced by the double effect of endorphins coupled with the satisfaction of doing a good deed for the environment is just the added bonus.

Last but not least, the quite original – and, let’s face it, a little off-the-wall – side of plogging is, in fact, its best asset: to draw people’s attention on pollution and plastic waste issues. By promoting fun and non-repressive approach of cleanness, plogging reaches its goal in a much more efficient way than many regular awareness campaigns.

“A few years back, picking somebody else’s garbage could be seen as degrading. Today, this attitude induces more and more pride. It means that our message is beginning to be heard”, states Nicolas Bernard, founder of Trail Runner Foundation, a French association of plogging.

The plogging app Run Eco Team created by French osteopath Nicolas Lemonnier in 2016 was immediately supported by Mark Zuckerberg, who published it on his Facebook page as “one of his favourite stories of the year”.

The app now gathers more than 50,000 users over the world and already contributed to clean 1 700 kilometres of streets, squares, countryside and coastal paths. The fact that Run Eco Team users keep on collecting 20 tons of garbage each week is both a good thing for the planet and a sign that the fight must continue now more than ever.

Over a quarter of Europeans do not exercise at all: Eurostat