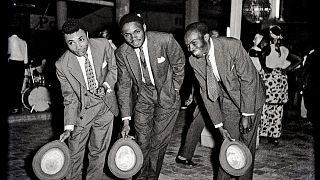 In 1997, the then 20-year-old Joël Andrianomearisoa appeared on the cover of pioneering contemporary African culture magazine Revue Noire, when its 26th edition was dedicated to Madagascar.

A little more than a quarter of century later, the art space he founded in the Madagascan capital, Antananarivo, is bringing the magazine’s photography collection to African audiences for the first time.

Indeed, the show The Spirit of Revue Noire: A Founding Collection (L' Esprit Revue Noire, une Collection Fondatrice) is a story of firsts: the first exhibition of the magazine’s collection in Africa, and the inaugural international show at Hakanto Contemporary, which is itself the first not-for-profit art space to arrive on the Madagascan art scene.

From its launch in 1991 until its last issue in 2001, the bilingual (French/English) Revue Noire published work by more than 3,500 artists working in Africa and the diaspora across literature, art, design, dance, music, theatre and, notably, photography.

The show’s curators (and two of the magazine’s founders), French architects Jean Loup Pivin and Pascal Martin Saint Léon, note that the mission of Revue Noire was to demonstrate the rich diversity of African art, largely overlooked in the mainstream western art world at the time; if the magazine was about showing the world African art, then the exhibition represents something of a homecoming. “The Revue Noire vision coming back to the continent – that’s one of the show’s main statements,” Andrianomearisoa, Hakanto’s founder and artistic director, tells Euronews Culture.

The choice of Antananarivo for this homecoming is not coincidental: “In Madagascar, photography has long been the main form of artistic expression. Tana (Antananarivo), particularly, has a rich history of photographic practices,” says Pivin. Nonetheless, only a handful of the 140 photographs on show – themselves but a fraction of the magazine’s collection – are by Madagascan photographers.

Instead, The Spirit of Revue Noire: A Founding Collection presents a compelling survey of African photography, examining its development from the late 19th century to the contemporary age, and placing Madagascan photography within the context of the practice across the wider continent. “I’d like the audience to understand the importance not only of the collection but of the history and of the aesthetic; we are not just an island, we are connected to this African history, including in terms of photography,” Andrianomearisoa explains.

This mission is reflected in the show’s layout: an outer ring of rooms, tracing the development of photography across the continent via the work of nearly 30 international artists, encircles a second space, showcasing the 1997 Madagascar issue. Local photography, therefore, is highlighted and honoured, and at the same time anchored within the context of a wider African practice.

Grouped loosely into three chronological chapters, the journey through the show begins in the late 1800s with the “Pioneers”. According to Pivin and Martin, many of these first African photographers used their experience working in European studios or serving in colonial armies to set up on their own.

This chapter charts the rise of portrait photography – first in customers’ homes, then in purpose-built studios, meeting the needs of what the curators describe as the “emerging African bourgeoisie”, as well as the steady demand for identity photos under the colonial administrations.

In parallel, itinerant press photographers were tasked with touring and documenting the continent, with the image of Congolese photographer Antoine Freitas taking pictures surrounded by a crowd in the country’s Kasaï province among the exhibition’s most captivating.

Photos of individuals surrounded by family portraits, courtesy of an anonymous photographer from Saint-Louis in Senegal (c.1939), suggest the high value placed on photography at the time. Pivin argues, however, that at this stage the impetus was a commercial one: “Photography was a business and a technical skill, not an art.”

Staged portraiture makes way for fluidity and vitality in the exhibition’s second chapter, “The Sun, Rise of Independences”. The 1950s-70s saw photographers venture out of their studios and into the streets, with many capturing the jubilation of freedom from colonial rule, together with the frustrations and challenges faced in the newly independent states.

New technologies such as the electronic flash allowed photographers to record the joyful freneticism of the continent’s nightclubs, with young people beginning to see themselves in images akin to those so familiar from western magazines.

Angolan-born photographer Jean Depara (1928-1978) was, for example, famed for his capturing the vibrant nightlife scene in Kinshasa, in the Democratic Republic of Congo; Malick Sidibé, meanwhile, chronicled the culture of 1960s Bamako, the Malian capital, in the wake of its independence.

“The photographers present an Africa discovering a new freedom, a newfound pride and a new future,” Pivin and Martin affirm. Though studios remained popular, they too adapted, with set-ups taking on a new inventiveness: from Seydou Keïta’s (1923-2001) introduction of props and vibrant backgrounds to his photoshoots with urban Malian society, to the almost theatrical poses struck by subjects (clad in the latest fashions, borrowed for the occasion, or even wrestling outfits) at the Kinshasa studio of Angolan-born Ambroise Ngaimoko (b.1949).

The end of the 20th century, say the curators, saw photographers in Africa “participating in an essentially aesthetic pursuit”. Now acting as artists, photographers took on larger questions: identity, beauty and the human experience.

It’s these currents that are charted in the exhibition’s final chapter, “Pursuit of an Aesthetic”. Though working with portraiture – a form once dictated by the desires of the subject – the meticulously crafted compositions of Nigerian photographer Rotomi Fani-Kayode (1955-1989) are undoubtedly the product of his own artistic vision and manage to be both intimate and political, exploring the tensions of race, sexuality, desire and spirituality.

Bringing an even more personal dimension to this investigation of identity, some artists experimented with self-portraits. Particularly arresting is the simultaneous vulnerability and power conveyed in the “White series” of Congolese artist Alain Nzuzi-Polo (b.1985), his form variously veiled, broken and cast among fruits as part of a still life – fluid, abstract and freed from norms surrounding bodies and gender.

Notably, beyond being grouped into loose chapters and accompanied by texts introducing the artists (as well as screenings of Revue Noire-produced videos and a collection of the publishing house’s books available for browsing), the works on show are left open to interpretation. “We’re not historians, and we refuse to impose our perspective on African art [...] because, in reality, history of art is history of western art,” says Pivin.

This principle is in keeping with Andrianomearisoa’s vision for Hakanto as a springboard: “It is not, and will never be, a museum or a gallery,” he explains. “It’s an artists’ space.”

For the creative director, who has his own artistic practice (including taking Madagascar to its first ever Venice Biennale in 2019), The Spirit of Revue Noire: A Founding Collection – despite being a historical survey – is future-oriented. “For me it’s an inspiration and I hope it will also be an inspiration for other artists,” Andrianomearisoa says.

Hosting such an international show in Madagascar, though, is not only about sparking local creativity – it’s also about demonstrating what is possible in the country, and growing its presence on the global art scene. “I think in Madagascar, we can do things – anything is possible here. We do it of course for the Madagascan audience, but it’s also Madagascar talking to the world.”

Which country is being hit with the first climate change famine?