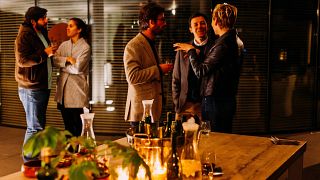 Whether you think of Christmas as the celebration of the birth of Jesus Christ or a modern iteration of the winter solstice, there’s one thing we can all agree on: Christmas is a time for indulging!

Each country has their own take on Christmas food: the Brits have their turkey, Estonians enjoy duck, and due to an absolutely blinding marketing move, the Japanese have KFC.

But what are some of the more unusual Christmas dinners out there?

From Stockholm to Stuttgart, each country has its own culinary traditions. Let’s take a look at the tasty (and tasteless) items on the menu at the European Christmas dinner table.

A western Norwegian delicacy originally eaten by poor people during the festive season, Smalahove is an innovatively prepared - and consumed - Scandinavian dish.

The Smalahove is cooked by first splitting a sheep’s head in half and then taking the brain out. After being soaked in water for two days, the head is salted and smoked before being steamed. Diners then tuck into the ears and eyes first - both considered the tastiest and most luxurious parts - before stripping away meat from the skull.

Today, Smalahove is enjoyed mostly as a novelty for tourists with local Norwegians forgoing the pleasure - can’t imagine why!

You’ve heard of a charcuterie board and maybe even a butter board. But have you heard of a Julbord?

Smörgåsbord is a word that’s entered the English language but it actually originates in Swedish as a platter carrying an array of delicious foods. The Julbord is a Christmas reimagining of this tasty treat, often boasting such Scandinavian delicacies as reindeer sausage and pickled herring alongside an assortment of cured meats and cheeses, all placed around a centrepiece of a glazed ham.

The yule log is a tradition in many countries that dates back to the pagan origins of Christmas when evergreen branches would be brought into the home to celebrate the days growing longer.

From the time when trees were brought in by peasants in the French countryside, this wooden ceremony has evolved into a dessert in the form of the Bûche de Noël: a chocolate sponge cake filled with buttercream and wrapped in marzipan all made up to look like a yule log.

Feast of the seven fishes, Italy

Italians do it better - just ask the guests at the White Lotus - and in this deeply catholic country, advent fasting has taken a delicious turn.

Traditionally, advent is a time for self-denial, contemplation and religious observance; so what better time to serve up a seven course meal? This southern Italian tradition sees locals tucking into a seven course meal of up to 10 different fish dishes.

The celebration, which takes place on Christmas eve, has spread to America with the Italian diaspora and is now a transcontinental tradition.

In Poland - as in many European countries - Christmas eve is the big day with a traditional meal including beetroot soup and sauerkraut.

The high point of this meal is the Polish carp which would have traditionally been fished well in advance of Christmas eve and kept alive in a large bucket or bathtub until the time comes to kill, scale and debone them.

Just like the southern Italians, Bulgarians have managed to turn a period of fasting into a thematic feast.

In this Orthodox country, the 40 days before Christmas are a time of fasting - so naturally Christmas eve (the biggest day of the festive period) sees a special meal served up. Of course, it’s all meat free to honour the tradition of going without.

This tasty meal must be made up of an odd number of dishes and is accompanied by a walnut, which diners crack open to reveal their fortune for the year.

We started with Norway so we’ll end there too.

Gingerbread houses might have some negative witch-related connotations for the rest of the year but at Christmas time they’re a charming treat for the whole family. Since the 1990s, the coastal city of Bergen, Norway has been playing with gingerbread competitions and now hosts the world’s largest gingerbread village every year.

This may not technically be something everybody eats but this attraction is certainly very pretty to look at!

Can foraging for Christmas Decorations save you money?

Christmas in Europe: Carp in your bathtub and other Czech traditions

Santa is back in business as Lapland expects tourism rebound