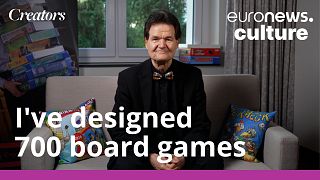 Reiner Knizia is like royalty in the board game community.

With more than 700 published games, spanning a 25-year career, he is one of, if not the most prolific board game designer in the world.

“I have played games and loved games as long as I can think,” remembers Knizia. “When I was eight or nine years old, I created my first games just to experience new themes, new challenges, which I couldn't get on the market.”

Reiner initially had a successful career in banking but eventually took his board game hobby to the next level.

“Initially, I started with strategic games, which fascinated me most when I was younger but, of course, I very soon learnt that only working in one genre is very restrictive. So I tried to open my horizons, starting with card games and with dice games, but then also children's games and even the very hardcore long two-to-three-hour games.”

Even after creating more than 700 games, Reiner swears he doesn’t struggle coming up with new creative ideas.

“If you open your eyes, games reflect our life... In order to design games, you need to have your eyes open in the world … And so you see game ideas wherever you look,” he says.

How to create a board game

Once Reiner has an idea in his head, he spends time researching the topic to give him some ideas of how to model it in the real world.

During the first stage, which he calls the _conceptual stage,_he tries to combine the theme and concept with game ‘mechanics’. These are the specific elements, rules, methods and physical components that provide gameplay. This stage typically ends with the creation of a prototype game.

According to Reiner, the second stage, the playtesting stage, is the “lifeblood” of game design. This period involves playing with lots of different people to see their reactions and gather their feedback.

Often the first playtesters are experienced players, “who will put the finger into the wound whenever there is a weakness in the game… and that's important,” says Reiner.

However, he also tests his games on target audiences, whether that’s families or even children.

“That is where you get a true answer,” he adds.

This stage is followed up with a lot of reviewing, adjusting and discussing.

“Then, if we are lucky, we get the final perfect game,” says Reiner. “Of course, the greatest objective is always… to invent a game which has worldwide success and which becomes a household name.”

The timeless pleasure of playing board games

Although Reiner loves to play games, it’s unusual now for him to play strictly for fun.

“There are always so many ideas to be tested and developed at every opportunity.”

He also stays away from other people’s games. While it’s important for him to understand market trends, he doesn’t want to be influenced by other people’s ideas.

“Once you know a solution in a design process for a certain problem… it is much harder to think of your own innovative solution,” he explains.

Reiner believes that board games have a unique ability to bring people together, regardless of age, religion, skin colour.

He also isn’t worried about the future of board games in an increasingly digital world.

“For me, it doesn't matter if I have a printed board or if eventually, I will roll out a digital board where I upload the board. The important thing is I sit around the table with other people. I see in their eyes. We have fun together. And this will not be replaced digitally unless all our brains will be in bottles and then it doesn't matter anymore."

"So I am very positive that we actually get new and richer experiences through the digital world in our physical gaming.”