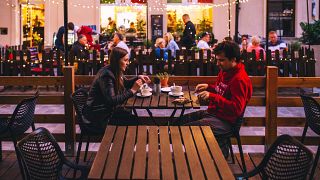 The online dating app Tinder is marking its 10th anniversary this year. For any business, that is a cause for celebration, but even more so for a firm that needs people to come together. Breakup. Again. And again.

The app, on which users swipe left or right depending on whether they’re attracted to the profiles they’re looking at, has become an entrenched part of digital dating culture.

Not so long ago, people who placed lonely heart ads in the classified section of papers looking for partners were widely mocked as somehow inadequate at best or, at worst, the subject of gallows jokes about catfishing and murder.

Now, online dating enjoys a begrudged normality made possible by a ubiquitous app culture which sees consumers use their phones for everything from ordering food to riding a bike.

However, a new, or rather, an old trend for in-person dating events is going through a remarkable makeover which is challenging the top spot that digital dating enjoys. Although these parties and events ironically often involve an app to get an invite, they offer an antidote to the endless swiping and stilted small talk of digital products like Tinder.

So, with in-person events on the rise amongst jaded singles, we have to ask are people sick of dating apps?

Broadly speaking, each dating app has its own gimmick. On Tinder you swipe, Bumble lets the ladies make the first move, Hinge claims to create long-term connections by asking users to answer questions about themselves.

Outside of this there are LGBTQ+ apps like Grindr (although it should be said Tinder and the like offer ‘preference’ options for all sexualities) and more niche items to suit every taste and fetish.

In-person dating events can be just as varied and - it has to be said - rely similarly on gimmicks.

The eponymously titled Thursday puts on events in hot spots for singles. Every week (guess which day) the app splutters to life on the day showing users who’s available and planning to attend. Meanwhile, Inner Circle organises glamorous parties and even destination getaways, depending on your budget.

“I would describe what we do as Tinder in reverse,” says Ben Mellor, the 25-year-old founder of Connect Two, a company that runs in-person dating events in Liverpool and Newcastle in the UK.

Connect Two events run on a traditional speed dating format where participants get an allotted amount of time with each other, attendees rank their dates on their connection rather than looks and say whether they want to match when they leave.

“There is a market for it, it is a great alternative to Tinder, Grindr, and Hinge,” says Mellor.

In a social media age where personal narrative is everything, part of the shift from app to in-person dating might be that people simply want a more romantic love story.

It’s true that great romances like ‘Romeo and Juliet’ and ‘Anna Karenina’ didn’t start on dating apps, but it’s also true that many of the characters involved in those stories took their own lives. While it’s touching to think that at a time when cynicism reigns people yearn for a fairytale, could it be true?

“We noticed a shift where everything was going digital and people wanted to go old school,” says Rutger Bruining, the CEO of Story Terrace, a biography writing service.

“We wanted to see if it was true that people were tired of…all the dating apps.”

Story Terrace commissioned research on the topic and found that 47 per cent of respondents believe their parents’ generation has more romantic love stories than their own, and more than half still believed in ‘the one’.

“I think people prefer the narrative of we met at an event, or through someone, or super randomly rather than being able to see who's 50m away from yourself.”

According to Mellor, dating app fatigue is common amongst his event attendees.

“We say why have you come and and they say I’m sick and tired of dating apps; people don’t treat them as real people, they treat it as a bit of fun, a bit of validation,” he says.

“I think doing it in person…you have a lot more desire to actually talk to people that you have matched with.”

In all conversations on this topic the elephant in the room in COVID-19.

Between 2020 - 2022 people spent months on end locked in their houses. For singles this meant endless chat on dating apps with no hope of meeting for a cheeky drink, or if there was a meeting it was the dreaded Zoom date. The pandemic also bred a micro-generation that came of age during lockdown and didn’t get the chance to date in their late teens and early 20s.

Inner Circle found that 69 per cent of their users would go to a singles party now compared with 45 per cent before, and a further 87 per cent think it is now more socially acceptable to meet someone at a singles party than it was pre-COVID, demonstrating a significant behaviour pattern change due to pandemic.

Mellor agrees, noting that app fatigue for youngsters is ever present at Connect Two’s in-person events, and notes that as well as dating the events act as an occasion for general socialising.

“People come with their friends and meet people there. It’s quite funny when you see a group of straight lads all sat together on a table,” he says.

“For the women half the people there are fellow women in the same position, and a lot of them come in pairs.”

Is this the end of dating apps?

Worldwide dating apps have 323 million users and the market share for these valuable attention-eliciting apps is more than €5 billion, so to be frank they’re not going anywhere any time soon.

Tinder is so ubiquitous that ‘swipe right’ has become part of the English lexicon, while Badoo, an app that is more popular overall in Europe than Tinder, still enjoys wide usage.

However face-to-face dating is growing with Thursday hosting regular raves and Connect Two planning events in new cities in the UK like Manchester and Glasgow. The digital ticketing platform FIXR also reports an overall rise in in-person dating events listed on their site.

It’s probably better to think of in-person and digital methods as part of a dating ecosystem that can peacefully coexist and, in many cases, compliment each other by working in tandem.

Dating apps are here to stay, but that doesn’t mean today’s singles are swiping left on looking for love in person.