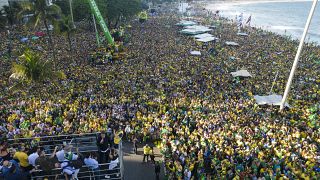 President Jair Bolsonaro delivers a speech to supporters at Copacabana beach during the independence bicentennial celebrations in Rio de Janeiro, Brazil, 7 Sept 2022   -   Copyright  Rodrigo Abd/Copyright 2022 The AP. All rights reserved.
The opinions expressed in this article are those of the author and do not represent in any way the editorial position of Euronews.
By Joao Vitor Da Silva Marques  •  Updated: 29/10/2022

The Brazilian football jersey is one of those iconic and instantly recognisable shirts around the world. A strip that throughout football history has inspired both fear and admiration.

You could probably ask anyone, anywhere in the world, a football fan or not, which country THAT jersey is from - and most would not think twice.

Worn by the likes of Pelé (or the king as he is referred to back home), Garrincha, Socrates, Zico, Ronaldo, Ronaldinho among so many others... The power of Brazil’s football shirt is undeniable. Worldwide.

It's a symbol of pride in a country divided by deep social inequality, a uniform that once represented a vast country of 200 million people, a nation which is obsessed with the sport. Yes, Brazilians excel at things like volleyball and judo at the Olympics too, and we had Ayrton Senna as a Formula One legend, but it is football that truly unites us, from the poorest to the richest.

Traditionally during World Cups, when Brazil is playing, the country normally comes to an almost complete standstill. When we hosted the tournament back in 2014, national bank holidays were declared every time the country was on the pitch.

And Brazil continues to be the only team on the planet to have won five world cups, despite having lost the last few ones.

But recently, that same venerated football jersey has entered the political arena in ways never seen before.

President Jair Bolsonaro has managed to associate his own political persona and his bid for a second term in office to the beloved shirt in a very effective way.

At political rallies and demonstrations, his followers wrap themselves in Brazilian flags and the majority of them wear the majestic football strip.

The Brazilian leader himself wears the garment often, at official and unofficial events. One of his biggest backers, a businessman by the name of Luciano Hang, owner of a massive chain of department stores, publicly wears a full green and yellow suit when in Bolsonaro’s presence.

So Jair Bolsonaro and his associates have in the last few years linked Bolsonarismo with Brazil’s national symbols, making it almost impossible for people to now distinguish between the iconic football uniform, with all of its symbolism, from the leader’s latest political campaign.

In the streets of Brazil today, wearing the canarinho - a historic and affectionate nickname given by Brazilians to their own football jersey - has become a political act.

Just watch some of the images from the last Independence Day, which in 2022 marked 200 years since the end of Portuguese ruling, and you will see how it has become problematic for non-followers of President Bolsonaro to wear the item.

During last September's commemorations, President Bolsonaro was accused by his critics of holding political rallies alongside his official duties in ceremonies held in both the capital Brasília and in Rio de Janeiro. And the colour chosen by the thousands attending the rallies? Yellow and green. And what was worn by the majority of his followers at these political events? You guessed it.

A quick search on social media proves just how divisive and how intense politics have become in Brazil in recent years. Supporters of Luiz Inacio Lula da Silva, Bolsonaro’s rival, wear red, the colour of the Worker’s party, which he represents. Supporters of Jair Bolsonaro wear green and yellow, and in most cases the Brazilian national team jersey.

Recently one of football’s biggest global stars, Neymar, who plays for Paris Saint-Germain and also for the Brazil national side, and who has been effectively living in Europe for the last decade, declared his unconditional support for Jair Bolsonaro, even participating in one of the president’s famous live streams on the internet.

Bolsonaro’s campaign scored a goal by associating their candidate with one of the biggest players currently in the national team. Some questioned Neymar’s motivations for a such public display of loyalty to the politician.

During an interview, Lula was quickly to hint that Bolsonaro had “forgiven” some of the player’s tax debts with the country. Neymar is currently being accused of tax avoidance in Spain, where he had played before moving to France. The case is ongoing.

Others put it down to Bolsonaro’s support of Neymar when the footballer was accused of rape at a Paris hotel by a Brazilian model in 2019. The case was dropped by Brazil’s authorities for lack of evidence, and the claimant was later accused of extortion by Neymar’s father.

But the association of a political party and its presidential candidate with the memorable shirt have taken proportions never before seen in ‘the country of football’ as Brazilians refer to their own homeland.

The country's flag and the national colours are also now being used as tools for political means by the incumbent candidate. It is definitely another goal from Bolsonaro’s team of publicists, but one the leaves wide open a number of questions.

Where does it leave the millions of voters who do not support Bolsonaro and his policies? Can a person in Brazil today, regardless of their political inclination, go down to the shops wearing the national team jersey, without fear of being questioned or even intimidated by a Lula supporter? If somebody wearing the same shirt was to declare in public that they do not support President Bolsonaro, how would other people react?

Some fanatic Brazilians have been accused of political extremism and deadly violence.

In August, Marcelo Arruda, who worked as a treasurer for his local worker’s party in the southern state Paraná - and a declared Lula supporter - was celebrating his 50th birthday at a private party in which the theme was Lula. Some guests wore red, and the worker’s party jingle was played. The face of the famous former president was imprinted onto the birthday cake.

Uninvited and unknown to the family, Jorge Rocha Garanho invaded the birthday shouting slogans associated with Bolsonaro. Challenged, he left, but later returned and shot dead Mr Arruda at close range, in front of his family and friends who had gathered for the birthday celebration.

A judge later declared the crime to be politically motivated and the killer, who was also shot during the ‘party’ but survived, is currently under arrest.

Earlier this month, another fatal crime took place. A supporter of Lula stabbed his own friend eight times during a fight in São Paulo’s coastal region. The victim, José Roberto Gomes Mendes, a Bolsonaro supporter, was wearing a t-shirt with the face of the president when the attack took place. He later died. The killer, Luiz Antonio Ferreira da Silva, alleged self-defense and confessed that an altercation about political views had taken place.

So the main question now is: When all this political divisiveness comes to an end - and one has to believe it will come to an end eventually - will ALL Brazilians be able to reclaim their celebrated national football shirt and stop literally killing each other?

Europe should keep a watchful eye on Bolsonaro after election | View