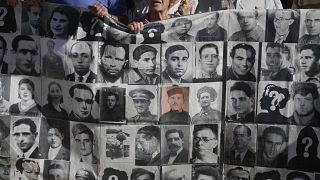 For many people the Spanish Civil War conjures up images of atrocities which shocked the world.

The bloodiest battle in Western Europe since World War 1, the conflict saw Republican, left-wing, and conservative factions fighting on the peninsula with atrocities endemic.

Although internationally the war is known through the works of Hemmingway and Picasso, for a long time in Spain the civil war was a subject best avoided.

“Not a single museum aims yet to convey the whole picture of the civil war,” says Anotnio Cazorla-Sanchez, Professor of history at Trent University, Canada.

“Why does the museum of the civil war not exist in Spain?”

Why is the Civil War so controversial in Spanish politics?

Cazorla-Sanchez is part of an international team which has spent almost a decade working to create a digital museum on the Spanish Civil War. The result, called the Virtual Museum of the Spanish Civil War, aims to provide information on the conflict outside of the realm of factional politics and a partisan media.

In 1977, two years after the death of Franco, the so-called ‘Pact of Forgetting’ was introduced as a non-aggression policy that would help politicians of all stripes avoid confronting the legacy of the dictatorship.

However, in 2007 a socialist government introduced the History Memory Law which is intended to confront the devastation and destruction of the bloody civil conflict.

Now, a decade and a half later, in the political theatre of Spain the civil war is still a contentious issue, as demonstrated by recent remonstrances in the Spanish senate over a proposed law to recognise victims of the civil war.

“It’s contentious in the political realm and that means it becomes very difficult at the national level,” says Adrian Schubert, Professor Emeritus at York University and collaborator on the project.

“We don’t agree with the image sometimes in the media of a Spain that still feels the civil war under the skin - it’s not true,” adds Cazorla-Sanchez.

“What politicians say and what society feels…are different.

“We want to bring normalcy by bringing knowledge to society - knowledge academics have been developing for many decades now.”

What is the legacy of the Spanish Civil War?

In the Franco years censorship typical of a dictatorship meant that no work on the Spanish Civil War could be conducted by Spaniards. The archives were closed and in any case the risk of reprisals was so great that people forwent any attempts.

Paradoxically only outsiders - mostly English speakers from the United Kingdom and the United States, or ‘Anglo-Saxons’ as the Spanish call them - were able to make such work, meaning many celebrated scholars during that period were not from the places where events occurred.

In the years following the death of Franco there was a proliferation of research by Spanish academics which has led to a wealth of resources today. However, lack of access, and distortion by a partisan media has meant a lot of this hasn’t got through to the public.

“The public debate simplifies what was an incredibly complex event,” says Schubert.

“The problem is that most people are unaware of the academic work despite the quality,” adds Cazorla-Sanchez.

“We want to do this beyond polemics and beyond high-pitched voices.”

What is the Virtual Museum of the Spanish Civil War?

The museum is the first national project, although it builds on regional work done in Catalonia and elsewhere. The idea is to create a joined-up approach which brings together the island museums in Spain’s regions.

This phase of the project, which both Schubert and Cazorla-Sanchez stress is an international team effort, is just the beginning. The current galleries will be expanded, and new ones added along with documentaries and interviews. The team is also running a project whereby members of the public can send them pictures of civil war-related objects.

By definition the Virtual Museum of the Spanish Civil War is open to anyone with an internet connection. Available in English and Spanish it will soon be translated into Spain’s regional languages as well.

“We want people to learn the facts, learn about the complexity of the war and the moral dilemmas and to learn that the tragedy could happen in any society,” says Cazorla-Sanchez.

“Any society can lose its freedom faster than we think.”