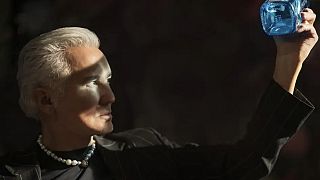 Squeeze in a powerful burst of Baz Luhrmann, the film director whose unmistakable style and lightning-fast lavish cinematography has made Romeo + Juliet and Moulin Rouge! such timeless classics and his latest film Elvis such a box office hit.

You’ve got ‘Saw This, Made This’, a multi-million-dollar global campaign to inspire people’s creativity.

The Australian filmmaker, who helms this creative call-to-arms, is inviting people to discover the creative inspiration that exists all around them.

"I truly believe that everyone is inherently creative, no matter who you are, where you come from or what you do,” says Luhrmann.

The Australian director stated that by partnering with the famous gin brand he wants to encourage people to think about how they can turn “the ordinary into the extraordinary” and “share this inspiration to make the world a more creatively nurturing place."

The road to World Creativity Day

What may sound like a well-meaning but cringey advertising campaign to sell more gin hides something far more creative.

The campaign rolls out across ten markets including the US, UK, Spain, Italy, Germany, Australia, New Zealand, Brazil, Greece and the Netherlands, and is inviting people to capture and share on social media what they see in the world that creatively inspires them. Through collaboration with hundreds of artists and creators from a variety of disciplines, the campaign will feature before-and-after ‘Saw This, Made This’ videos and photos, demonstrating how people can reframe the world around them and turn that inspiration into creative expression.

Submissions can be viewed on an evolving online gallery and the campaign will also include a short film from Luhrmann’s personal archive featuring never-seen-before footage of the director talking about the experiences that have shaped his own creative process. Throughout the campaign, Luhrmann will share on social media the #SawThisMadeThis submissions he finds most creatively inspiring.

It will culminate next year in a global showcase of the world's creativity, in partnership with global arts organizations in London and New York, including the Design Museum in London. This will take place during World Creativity Day on 21 April 2023.

“You don't have to be labeled an artist to be considered a creative,” says Luhrmann.

“If you just give yourself permission to see the world as a gallery of inspiration and reframe how you think about things, you'll unlock a part of yourself you didn't know existed.”