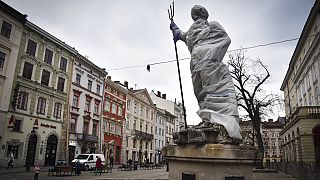 Ukraine's Minister for Culture Oleksandr Tkachenko says that the vandalism and targetting of his country's cultural sites is nothing short of a "genocide" by Russian forces.

Since the war began on February 24th 2022, over 500 cultural heritage sites have been subject to Russian agression, according to Tkachenko.

Speaking to Euronews, Tkachenko said the damage caused is calculated by Moscow.

"It’s not only about Ukrainian people [in terms of] human lives [lost] and territory, it’s also about our identity, our culture and our heritage. As soon as Putin and his regime deny the identity of Ukrainians, they’re trying to ruin everything that’s connected to cultural heritage.”

Preparations are now underway by the country's Ministry of Culture to protect what remains and fix what has damaged. Monuments have been covered extensively in sandbags, while plans to protect religious sites and galleries remains a priority for the winter months.

The ministry also reached out to Uber for logistical help in retrieving artifacts that needed saving from damages.

Both Ukrainian and Russian languages are mutually intelligible, with 30% of Ukrainians speaking Russian as their first language.

Tkachenko says that in light of Russian troops targetting Ukrainian media, attacking libraries and destroying history books, Russian speakers in the country have switched their choice of language, in a show of defiance.