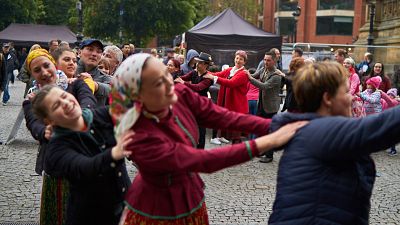 In early June Otillia Ordog was on a hillside in the Carpathian mountains as 300,000 people sang a Hungarian hymn to celebrate Pentecost.

“It is pretty unique, even if you’re not religious, it is uplifting. You can see for miles,” says Ordog.

“That many people singing at the same time, it is spiritual, it will touch your heart.”

Ordog was visiting her homeland, Szeklerland, a region of Romania with a large Hungarian-speaking minority; a legacy of the division of the Kingdom of Hungary after WWI.

To date there are 1.2 million Hungarian speakers in Romania, making up over six per cent of the population, the biggest minority in the country. The Szeklers make up a distinct group within this and claim they can trace their ancestry to Attila the Hun.

However, despite having the right to speak their own language freely at an individual level, there is little official recognition of Hungarian in Romania, with the constitution stipulating Romanian as the only official language in the country.

“They have to fight in order to use their mother tongue,” says Ordog, who was born in Szeklerland before moving to the UK as a child.

“Sometimes you have to fight a little bit harder to use your own language.”

Szeklerland is made up of three majority Hungarian-speaking counties in Transylvania, in the northern part of Romania.

Urban centres in Transylvania were developed in the post-war period by the communist dictatorship, which deliberately brought in workers from other areas to dilute the Hungarian-speaking population.

However, the region is still home to many Hungarian speakers, who live in a setting surrounded by mountains, thick forests and natural volcanic springs.

Romanian law recognises the 'Personality Principle' which states that if one-fifth of the population of an administrative area speaks a language it can be used in institutions like schools and courts.

This has led to a high standard of Hungarian-language education in Szeklerland, but a significant lack in other areas of the country.

Between 1952 - 1968 Szeklerland was an autonomous region, however, this was eventually revoked by dictator Nicolae Ceaușescu. These days, despite individual freedom, the Szeklers lack the collective autonomy enjoyed by other linguistic minorities, such as German speakers in Italy.

What is the status of Szeklers now?

Despite the Romanian government setting aside several attempts since 2006 for the Szeklers to regain autonomy, there are grassroots revivals of the unique Szekler culture which aim to retain the region's identity.

An initiative called ‘Igen, Tessék’ (which translates as ‘Yes, please!’) seeks to encourage speaking Hungarian in the city of Cluj-Napoca. It so far has a network of over 600 participating businesses and a newspaper that reaches 18,000 readers.

There has also been a proliferation of Szekler products, with one brewery even winning a legal battle against Heineken for naming rights of their product.

However, the lack of collective rights still creates difficulties for the Szeklers.

In Cluj-Napoca, despite a high population of Hungarian speakers, there is no official policy on bilingual signage, and court cases brought by CEMO over bilingual signage in other areas were rejected by both the high court and court of appeal in 2017.

The Szekler diaspora in Europe

As well as an unsettled status at home, Szeklerland also occupies an ambiguous status abroad.

Szeklers make up part of the Hungarian-speaking diaspora in Eastern and Central Europe across countries including Croatia and Slovenia, who enjoy voting rights in Hungary.

This diaspora, whom Viktor Orbán considers part of the Hungarian nation, generally support the Fidesz party.

However, an application in 2018 by the Szeklers’ World Alliance to Orbán’s government to recognise the Szeklers as an ethnic minority was rejected. In Budapest the Szeklers are considered Hungarian.

Meanwhile, outside of the region not many would recognise the Szekler name, if they even realise where Transylvania is.

“I say where I’m from and people don’t realise it’s a real place,” says Ordog.

“Nobody knows about my culture,

“There are cartoons, horror films, I think it’s important to make it real and get people to know there’s more to Transylvania than Dracula.”

Ordog organises an annual festival in her now-home city of Manchester, Góbéfest, which since beginning as a celebration of Szekler culture, has now grown to include Bulgarian, Polish, and Ukrainian diasporas.

“It makes folklore and folk dancing cool again when they get to see all those bright colourful costumes,” says Ordog.

The festival is important for Ordog in terms of protecting her homeland as much as showcasing her cultural heritage.

The Transylvanian forest is the largest remaining forest in Europe but is under threat from deforestation and illegal logging. Góbéfest now partners with the Woodland Trust to help promote reforestation.

Workshops for children, traditional beer and the quintessential Szekler chimney cake Kürtőskalács are all available at Góbéfest, but what makes the festival most special for Ordog is the diversity it showcases.

The irony that a marginalised Romanian culture is being celebrated in Manchester is not lost on Ordog, but she believes the multicultural city, where 200 languages are spoken, is the perfect place for her festival.

“Góbéfest fits here because diversity is celebrated. It should be celebrated across Europe,” she says.

“When you celebrate differences you’re celebrating similarities as well.

“When you get together magic happens.”