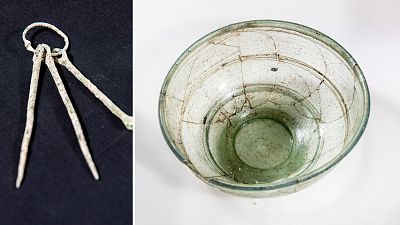 Archaeologists working on a site in Buckinghamshire in England have unearthed the well-preserved graves of a clique of wealthy Anglo-Saxons.

The site, which was excavated as part of the ongoing construction of the UK’s high-speed rail service HS2, contains 138 graves and is one of the largest ever uncovered.

Among the items found were a number of grooming tools including earwax removers, toothpicks, tweezers, combs and even a tube that could have contained makeup such as eyeliner; shedding light on how our ancestors practised self-care.

One of the burials, thought to be a male aged between 17-34, was found with a sharp iron object in his spine. Researchers believe he was stabbed from the front before the object embeded in his spine.

The insights offered into Anglo-Saxon life are unprecedented. The site is known to have been used by Romans during the Bronze Age and even in the Neolithic period, but the 5th and 6th centuries from which the objects are dated represents a gap in the historical record.

“The significance of this site for our historical and archaeological understanding of Anglo-Saxon Britain is huge,” says Dr Rachel Wood, lead archaeologist for Fusion JV, the Enabling Works Contractor who carried out the fieldwork in 2021.

“The proximity of the date of this cemetery to the end of the Roman period is particularly exciting.

“Especially as it is a period we know comparatively little about. The material objects will tell us so much about the people who lived during this period, as will the people themselves.”

As well as the personal hygiene effects, Anglo-Saxon jewellery, swords, shields and spears were also found.

The people found on the site were buried with 2,000 beads, 89 brooches and 40 buckles. Many of the items indicated the area was trading with the rest of Europe.

Two glass beakers were unearthed, which indicates that fine wine may have been imported from the European mainland, and one woman was found buried with an ornate glass bowl made of pale green glass.

The bowl is thought to have been made around the turn of the 5th century, and could be a Roman heirloom.

“This stunning set of discoveries on the HS2 route can tell us more about how our predecessors lived, fought and ultimately died,” says historian Dan Snow.

“It is one of the best and most revealing post-Roman sites in the country.”

The findings will feature on Snow’s podcast, ‘History Hit’ on 16 June.