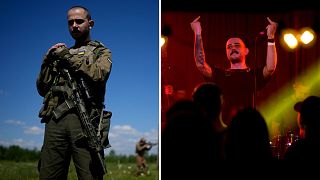 From Ukraine's battlefronts comes rap music, filled with the fury of a young generation that will certainly never forget and may never forgive.   -   Copyright  AP Photo
By Tim Gallagher  & AP  •  Updated: 09/06/2022

"This is my lands, you boys should leave,"

"Miss those Fridays we used to have, kisses, twilights, refuse to sleep. Now we soldiers."

Holding a rifle and dressed in combat gear, Otoy sings a song dedicated to the Azov regiment, a unit his brother died fighting in to defend the Ukrainian city of Mariupol.

A rapper-turned-volunteer soldier Otoy is putting the war into words and thumping baselines, tapping out lyrics under Russian shelling on his phone, with the light turned low to avoid becoming a target. It helps numb the nerve-shredding stress of combat.

He is one of many young Ukrainians channelling their rage over Russia’s invasion into music.

The sad-eyed 23-year-old didn’t know he could kill until he had a Russian soldier in his sights and pulled the trigger in the war's opening weeks.

One of the ironies of Russia’s invasion is that in ordering the destruction of Ukrainian towns and cities, Putin is fueling one of the very things he wanted to extinguish: a rising tide of fierce Ukrainian nationalism.

In France, after the horrors of two German invasions in the twentieth century, antipathy for all things German ran high.

Only in 1984 — four decades after Nazi Germany's capitulation — were French and German leaders Francois Mitterrand and Helmut Kohl able to stand hand-in-hand in reconciliation at a WWI monument in France filled with bones of the dead.

Similarly in Ukraine, the young generation born after the country's declaration of independence from the Soviet Union in 1991 say they cannot imagine feeling anything but disgust for Russia for the rest of their lives.

Otoy's lyrics, with choice expletives directed at Russia and stark descriptions of Russian war dead, speak from the heart, fuelled by grief for his brother.

It is a cold fury shared by many of his peers, that pours out in song, in art and tattoos, online in hashtags proclaiming, "death to the enemies," and in memes targeting Putin.

Efforts have also been focused on raising money for the Ukrainian war effort.

Iryna Osypenko, 25, was among concertgoers at a fundraising music festival last weekend in Kyiv, where Otoy gave a fiery performance. She broke down in tears as she explained how the growing reservations she'd had about Russia before the invasion have scaled up into rage.

Otoy says that if he has kids, he'll do likewise, telling them, "the Russians were killing my family, killing my brothers, my sisters, bombing our theaters, hospitals.

"It's not just that I don't like Russia, I hate this country, and I hate Russian people as much as I can.”

Who were the Azov regiment?

The Azov Regiment clung doggedly to the surrounded plant for nearly three months, becoming an enduring symbol of Ukrainian resistance. Otoy rapped his song ‘Find My Country’ in English aiming that the story would reach "people all around the world."

His duties of late have included helping at a military hospital with the triage of bodies from Azovstal, turned over by Russian forces in an exchange. His brother's remains are still missing.

He's also working on his collection of songs largely penned during repeated ammunition runs to troops in the east, where fighting has raged since Russian forces were pushed back in their initial assault on Kyiv.

Themes include life on the front and the camaraderie of soldiers, war-time life for civilians, enmity and fighting for Ukrainian freedom. He says the mini-album reeks of "the smell of war dust."

"I was actually lying on the ground under the airstrikes and bomb shelling," he said. "You can actually the feel the smell of, you know, like bombs, dead bodies, and dust, blood and other stuff."

"This is the best way to show your hate, I think."

Check out the video above to hear some of Otoy's music