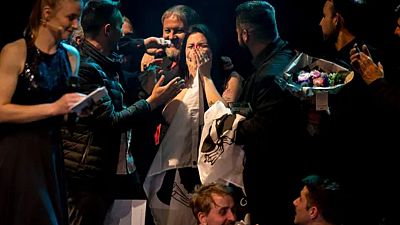 While the eyes of millions of Europeans were glued to the flamboyant show on stage at the Eurovision Song Contest, another music festival celebrating European identity was taking place hidden away from the spotlight.

They call it the “Eurovision of minority languages,” but the title would be reductive of what Liet International actually represents.

On 13 May, in the small and picturesque town of Tonder in southern Denmark, which counts under 8,000 inhabitants, 13 musicians from all around Europe took part in Liet International a niche music festival for European minority and regional languages only.

While musicians at Eurovision have the support of millions of spectators from all over Europe, performers at Liet International play to an audience of a few hundred. In some cases, the musicians perform in languages which are so rare that only a few thousand people in Europe would understand the lyrics.

And yet, the importance of Liet International could easily eclipse that of the Eurovision for the role it has in representing Europe’s identity and diversity.

French folk singer Billy Fumey, who performed a love song in France-Provençal, says that the festival is important, “it’s an occasion to share my language, my music, my universe.”

Some of the smaller languages on stage, such as the language Saami—spoken in Lapland and adjacent areas by approximately 30,000 people—are at risk of disappearing.

These types of endangered languages rely on families and local communities to keep them alive, often without the support of their national governments.

“I try to talk in Galician as much as I can, because it's very, very important to keep it alive, daily,” Carolina Rubirosa, singer and speaker of Galician—a language spoken by some 2 million people in northwestern Spain—told Euronews. “These festivals are very important because it's exposure and it's very, very important but I think it's even more important to keep talking with your friends, with your family, with people in the streets in the day to day life. So I keep trying as much as I can.”

Carolina was meant to participate in both the 2020 and 2021 editions of the festival, but the pandemic got in the way. She thought she’d never have the chance to perform in person at the event but to her surprise the festival accepted another one of her songs this year.

She brought on stage a song titled “Camino Ingles,” a touching story of hardship and friendship that she wrote after hearing the experience of a friend who had walked the Camino de Santiago, a route historically taken by pilgrims coming from Britain and Ireland.

“I think that for cultural importance and the richness of the content offered, [Liet International] is one of the most important festivals in the world,” Sardinian singer Emanuele Pintus told Euronews.

Emanuele, a singer from Cagliari, Sardinia, won the audience award for best performance with his song “Genia”, a heartbreaking piece about a poor family forced to send away their older son to sustain their younger children.

The event is not only about keeping traditions alive, there is often a message of political resistance in the performances from regions where independentist groups still push for autonomy from the national government.

Corsica’s singer Doria Ousset, for example, won this year’s competition with a highly political piece about a 17th-century Corsican soldier facing execution by French forces. In an on-stage interview, Ousset said her mission was to sing about Corsican history because the French state “doesn’t want” Corsican people to know it.

“The French government says there’s only one language in France, and it’s French,” Doria told Euronews. “Corsican is sadly not taught at school. France doesn’t want Corsicans to know their history. And so it’s a mission for me. I have to sing this song because I am a cultural militant and activist, like my mother and my family.”

Corsican is currently spoken by less than an estimated 150,000 people and is considered to be “definitely endangered” by the UNESCO Atlas of the World's Languages in Danger.

Despite the underlying political messages, Liet International is a very relaxed event. Between the singers there’s something of an immediate bonding, says Carolina.

“My colleagues, the participants, we were not competing, you know, it was like a celebration. We were celebrating our languages, and we felt so proud,” she told Euronews.

“To meet and become friends with the other bands at the festival, coming from all around Europe, was an amazing experience,” said Emanuele Pintus. “We’re keeping in touch with a few bands to organise more concerts in our countries.”

There’s no specific reason why minority languages should be confined to Liet International. Eurovision currently has no rule regarding which languages the artists can perform in.

In fact, France took part in this year’s Eurovision with a song in Breton. A proud moment for the performers and speakers of the language, despite coming in second to last in the ranking.

“France has a big diversity of language, and sometimes I think it’s normal to bring something other than French on stage. There are three languages spoken in my region alone,” says Billy.