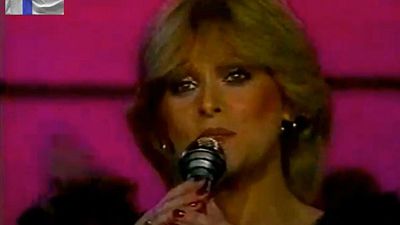 The year is 1980. It’s the height of the Cold War. The Berlin Wall still divides one of Europe’s great cities. In the summer, the Olympics will be held in Moscow, but many European countries will boycott them in response to the Soviet invasion of Afghanistan the year before.

Meanwhile, that other great international competition, the Eurovision Song Contest, is still very much a club for Western Europe – the eastward expansion wouldn’t happen for more than a decade.

So Eastern Bloc countries are busily planning the fourth – and, as it turns out, final – edition of their own singing competition: Intervision.

The Intervision Song Contest ran from 1977 to 1980 and was held in Poland, replacing the long-established Sopot International Song Festival.

The format was familiar: Eastern Bloc countries connected via the Intervision television network could each send a performer to Sopot, where a jury chose the winner after watching the performances.

The first three victors were Czechoslovakia, the Soviet Union and Poland, and, because other European countries (including the Netherlands and Spain) did send entrants from time to time, the 1980 Intervision Song Contest was won by Finland.

“It was live, and it was in a wonderful outdoor theatre. And it was very big, I think 15,000 people or maybe even more,” recalls Marion Rung, the Finnish singer who won that final Intervision Song Contest.

“It looked very much like Eurovision. It was a fantastic orchestra, and a fantastic conductor,” she told Euronews from her home in Helsinki.

By the time she went to Intervision, Marion was no stranger to big singing contests.

In fact, she’d represented Finland twice at the Eurovision Song Contest, both times finishing in the top 10.

At the 1962 Eurovision in Luxembourg, she was the youngest competitor – aged just 16, she sang Tipi-Tii (which translates as Chirpy-Chirp) in a bright yellow dress.

“It was really overwhelming; so exciting and I couldn’t believe it. I was so very young at that time,” said Marion. “My mother used to sing when I was young and she helped me a lot with singing and how to perform things. We used to do all the things in our kitchen, so she helped me very much with how to present the song."

More than a decade later, Marion was once again in Luxembourg, representing Finland for a second time at Eurovision – this time in a brown dress with orange stripes, the epitome of 1970s style.

"I was an established artist by 1973 and I was more secure about myself, I can say. We had a lot of press with us from Finland and it was the same concert hall from 1962,” she recalls.

The build-up to the contest saw cocktail parties and press conferences, including an event in a sauna with Swedish contestants The Nova, which Marion remembers as "quite interesting".

“I had all my clothes on, and some of the journalists just had a towel. It was really funny! I don’t remember what the Swedish guys were wearing but I was the only one with all my clothes on – and a hat!”

Her song Tom Tom Tom – sung in English – went on to finish in 6th place, just one point behind Sweden, and it would remain Finland’s best Eurovision placing until Lordi won the contest in 2006 with Hard Rock Hallelujah.

When the Eurovision Song Contest took place in spring 1980, Finland had high hopes for success, sending established actor and entertainer Vesa-Matti Loiri to represent the country with his song Huilumies – meaning Flute Man.

The undeniably catchy tune didn’t resonate with the judges, who awarded it just six points, and Finland came last out of 19 countries. So, in an attempt to salvage some national pride, Finnish public broadcaster Yle threw everything they had at Intervision.

Marion was chosen as the singer, and given 10 songs to perform in the national pre-selection show, with Hyvästi Yö – which would eventually be sung in English as Where is the Love at the contest – chosen as the winning track.

“I just remember thinking the whole week, as I always think of course, when I will go to the stage I will walk in like a winner,” said Marion.

She recalls there was no time to dwell on the East vs West geopolitics surrounding the contest; the focus was squarely on the music.

“When we were there, we didn’t really think about it. There were a lot of people and they took very good care of us. We lived in a luxurious hotel. We didn’t really walk around the city. I know what was happening outside but we were just working and discussing with all the other participants.”

Marion performed with a full orchestra and backing singers, dressed in a floor-sweeping black and gold gown, and the audience loved it. So did the jury, putting her in first place.

“There was a lot of applause and some shouting if I remember. It was really very, very nice,” she said.

And what was the prize for winning the Intervision Song Contest?

“If I remember right it was a lot of Polish money, which you couldn’t take outside Poland!"

Marion spent her winnings (locally, of course) on jewellery, before returning to Finland to renewed fame.

“In a way it was a terrible prize, but it has given me so much. It was wonderful, I felt like a queen everywhere when I came home,” she remembers. “There was a lot of media attention, and people, it was unbelievable how much they loved me.”

Since finding fame in the 1960s, Marion has become a household name in Finland and is still (in her late seventies) performing, with a series of Finnish festival dates and concerts on the calendar this year.

The last days of Intervision

The year after Marion’s Intervision triumph, the contest was cancelled, amidst the rise of the Polish Solidarity movement and growing unrest in the Warsaw Pact countries.

Russian President Vladimir Putin did try to revive Intervision for the 21st century, with a new contest planned to take place in Sochi in 2014, involving former Soviet Union states and the Shanghai Cooperation Council members. This was in response to Russian anger over the "moral decay" of Eurovision, after bearded drag queen Conchita Wurst won for Austria that year.

But those plans never came to fruition, so Marion Rung and Finland remain the last winners of the Intervision Song Contest, the Cold War rival to Eurovision.