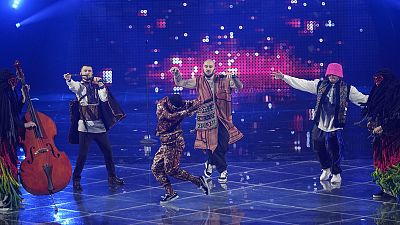 The biggest pop music competition in the world commenced with the first semifinal on Tuesday night, seeing 10 out of 17 countries earn their place in the final -- including the Ukrainian entry, widely expected to finish on top of the podium.

They are to compete with another 10 that will get selected on Thursday and the "big five" who qualify for the final automatically -- France, Italy, Great Britain, Spain, and Germany -- for the big prize of the continent's best on Saturday.

Here are the main takeaways from the first night of this year's Eurovision Song Contest:

The first elimination test of the event, held this year in Turin, offered a welcome respite for the war-torn old continent, and the theme of the evening dubbed "Sound of Beauty" saw a modern-day Leonardo Da Vinci create a drone that took flight across Italy, introducing the 17 competitors as they appeared on stage.

The hosts -- Italian singer Laura Pausini, comedian and TV presenter Alessandro Cattelan and British-Lebanese pop star Mika -- did their best to keep the audiences across Europe immersed in the almost-three-hour programme.

The recent crises, such as the ongoing COVID-19 pandemic, were either left unmentioned or casually brought up as the three hugged on stage with pandemic measures mostly relaxed.

Similarly, there were no mentions of the war in Ukraine, apart from a few contestants such as Lithuania briefly flashing a Ukrainian flag backstage.

However, all eyes were on the Ukrainian folk-rap group Kalush Orchestra who remain favourites to win ahead of Italian duo Mahmood and Blanco, Britain's Sam Ryder and Sweden's Cornelia Jakobs, with the rap lullaby "Stefania" written before the Russian invasion of Ukraine.

The band, which was given special permission by the Kyiv government to perform at the competition, stole the show, receiving a standing ovation mid-way and long applause afterwards as the group's singer Oleh Psiuk thanked the audience for supporting Ukraine.

The band was chosen as a replacement for the winner of the national final, Alina Pash, after she withdrew following a dispute over her visit to the Russian-occupied Crimea in 2015.

If Kalush Orchestra were to win on Saturday, it would be Ukraine's third victory after it won in 2004 and 2016.

Ruslana's "Wild Dances" won the first title for Ukraine, while the second victory came two years after Russia annexed Ukraine's Crimean peninsula -- with Jamala and the song "1944", a song about Stalin's deportation of Tatars, making the country the first in Eastern Europe to win the contest twice.

The European Broadcasting Union (EBU), which organises Eurovision, excluded Russia from the contest on 25 February, the day after Moscow's invasion of Ukraine.

Diversity, both cultural and musical

Judging by the first night of the competition, the Eurovision Song Contest has never been more diverse, both culturally and musically.

While many acts opted to sing in English as the go-to language of the competition, the general feeling was that more countries decided on songs representing their native languages, like Ukraine, or Croatia's Mia Dimšić, who sang in both English and Croatian.

There was no lack of acts that incorporated musical traditions of the countries they represented, either.

Rock acts seemed to have fared the worst, with both Denmark and Bulgaria -- whose entry was a clear homage to the great rock'n'roll bands of the past -- failing to reach the final.

Ballads were a hit-and-miss, with the Croatian entry "Guilty Pleasure" also not making it to the final on Saturday, while slow moody acts like Switzerland's Marius Bear and "Boys Do Cry" made enough of an impact to pass the grade.

One of the standout acts of the night was Iceland's Systur, whose sound -- which could be described as a crossover between Townes Van Zandt and Haim -- showed that mellow and subdued could be good if done well as they basked on the stage in the glow of various shades of orange.

Glamorous and bizarre attract attention, but only a few advance

Like in previous years, songs flirting with sexual innuendos like Lithuania's sultry cabaret-like act— or even featuring overt references, such as Latvia's vegan-themed song's opening line about "eating veggies" — fared quite well on the opening night.

However, Albania's hyper-sexualised act that also tried to incorporate a more traditional sound failed to impress, despite its topless beefy male dancers and thunder-and-lightning visuals.

Slovenia's funk schlager, Disko, performed by teen band LPS, was reminiscent of Eurovision's bygone era, but the retro pull was not strong enough for them to make it to the final.

Austria, with its distinctly 90s sound coupled with a DJ performance and all-black outfits, made it the biggest party song of the night, and its failure to attract enough votes was one of the surprises of the first semifinal.

Yet it was Norway's Subwoolfer, a duo of brothers wearing yellow wolf masks with white teeth, black suits and white shirts, whose zany "Give That Wolf A Banana" might turn out to be this year's competition's biggest hit.

The competition continues on Thursday at 9 pm CET, with Sweden, Poland, and Serbia all expected to be among the final top 10 according to the bookmakers.