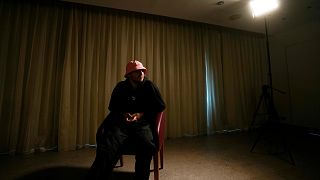 Ukraine’s entry to the Eurovision Song Contest looks set to win over the hearts of viewers during the competition next week.

With Russia banned from this year’s contest and the rest of Europe watching Putin’s invasion of Ukraine with horror, it’s easy to see why Ukraine is one of the favourites to win this year.

This year, Ukrainian band Kalush Orchestra will represent the country with their song “Stefania”.

“Stefania” is already the most-watched song on YouTube of the 35 national entries ahead of the Eurovision final on 14 May. Often the amount of streams a song has before the competition is a good indication of how the country will perform. Many oddsmakers have put Ukraine as one of the likeliest to win this year.

Even if Ukraine doesn’t win with “Stefania”, the Kalush Orchestra will still leave viewers with an emotional experience. The song is dedicated to lead singer Oleh Psiuk’s mother and also delves into his experience of the war.

“I’ll always find my way home, even if all roads are destroyed,’’ say the lyrics to “Stefania”.

“Indeed, some stuff in here was written long before the war, and it was dedicated to my mother,’’ Psiuk told The Associated Press from Turin, where the Eurovision final will be held.

“After it all started with the war and the hostilities, it took on additional meaning, and many people started seeing it as their mother, Ukraine, in the meaning of the country. It has become really close to the hearts of so many people in Ukraine," he said.

The purpose of the song is also to demonstrate Ukraine's individuality and identity, distinguishing it from Russia.

Traditional Ukrainian folk music merges with hip-hop to create “Stefania”’s unique soundscape. There are old Ukrainian melodies and the use of a Telenka, a unique and difficult to play woodwind instrument.

Even the dance the band will perform is uniquely Ukrainian. Hopak, a Ukrainian folk dance is combined with break dancing as Kalush Orchestra perform in Cossack/streetwear combo costumes.

“We ourselves show that Ukrainian culture and Ukrainian ethnic code exists,’’ Psuik said. “Our purpose is to make Ukrainian music popular, not only in Ukraine but all over Europe. And Eurovision is the best platform for that.”

Performing as the country fights

Named after the town of Kalush, south of Lviv, where Psiuk is from, the group formed six months ago as a cultural project.

The group was given special dispensation to leave Ukraine for the competition. Men of conscription age have been banned from leaving the country to help with the war effort and all the members will have to return to Ukraine after the competition.

The Kalush Orchestra had to travel by land to Poland to exit the country and then travel to Italy.

“We feel a big responsibility,’’ Psiuk said. “It’s very important for us to be as useful to the country as possible. We want to represent our country decently.”

Looking ahead to the final, he added, “I really hope that after we perform it at the Eurovision Song Contest, Ukrainian music will be even more popular and heard.”

Can the EU or Ukraine ever use Russia's frozen assets?