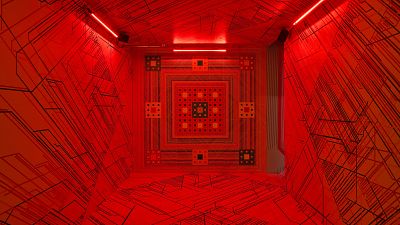 Art that wraps around you.

180 Studios is opening a new exhibition dedicated to immersive art.

Sixteen installations blur the lines between physical and virtual artworks, all at the crossroads of art and technology.

Located in a former underground car park, the exhibition is designed like a maze to get lost in, as you wander through the dark rooms.

An installation explores the different forms of columns with rotating mirrors.

In a pitch-black room, lasers scan the floor and walls.

The installation, by United Visual Artists (UVA), is made of four kinetic sculptures projecting single-colour planes of light.

Further down, another installation explores a world populated by digital humans in a desert-like environment.

After scanning a QR code on the wall, visitors are invited to show a webpage to a machine next to each screen to start new videos.

"Mustafa" is an artwork dedicated to the father of the artist, thanking him for inspiring him and teaching him art.

Other highlights include "Vigil," an installation made up of an ice block with the imprint of a hand, hung in front of a round screen displaying videos of landscapes.

Most installations don't necessarily have an artistic message, but rather experiment with technology.

One of the biggest installations is "Vortex," created by Barcelona-based studio Hamill Industries.

It uses light projectors, a purpose-made soundtrack and smoke effects.

The end result is a travelling smoke ring synchronised to the music.

"This piece in particular is about experiencing the sound physically throughout all the senses. There's this very beautiful musical piece. So you can experiment that as a musical piece, but if you can just kind of do one step away and see like how it travels, how the light follows. It's about - it's a pentagram. It's a musical pentagram made light, made smoke. So that's what it's behind the vortex. And that's the message behind the vortex, experiencing sound," says Anna Diaz, mix-media artist, Hamill Industries.

Actor Michel Bouquet dies aged 96: Why he so important?