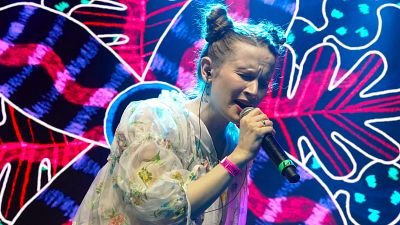 Russian rapper Noize MC bounds onto the brightly lit stage in Warsaw to the screams of hundreds of adoring fans at his anti-war concert.

After an emotional speech denouncing the Kremlin's sweeping military operation in Ukraine, he flashes a peace sign with his fingers to the audience of mostly Ukrainian, but also Russian and Belarusian, fans.

"I will be making this sign until my hands are tied behind my back," Noize MC told the crowd, alluding to alleged Russian atrocities in Ukrainian towns such as Bucha, where bodies were found with their hands bound behind their backs.

Noize MC, 37, real name Ivan Alexeyev, is one of two Russian pop acts who have teamed up to perform in the Czech Republic, Germany, Latvia, Lithuania and Poland to raise money for the more than 5.2 million Ukrainian citizens forced to flee the conflict since February 24.

He and his touring partner - the electronic music star Monetochka - have so far raised more than 200,000 euros ($214,000) for a Polish charity helping refugees with their 'Voices of Peace' concert series.

"I wanted to find a way where I can be most effective in speaking out," Monetochka told AFP in an interview before her set.

When she did take to the stage, it was against projections of ballerinas from the Russian ballet Swan Lake, which is highly symbolic in Russia as a byword for Soviet decay and regime collapse.

Wearing a white dress and with her hair, as always, in two buns, Monetochka delighted the crowd with a percussive poem mocking Russia's attack before a set of electro-pop hits.

"We found a way where we can really make a difference and for a second forget about the feeling of guilt," said the softly spoken 23-year-old, whose real name is Liza Girdimova.

Born just before Vladimir Putin came to power, Monetochka is part of a generation that has only known his rule.

Her lyrics used to reflect concerns about Russia's trajectory "hidden in metaphors." The last two months have changed that.

"I'm talking about war without synonyms," she told AFP, referring to a Kremlin order that Russians can refer to the fighting only as a "special military operation."

At the same time, she says, she's wary of ostracising fans who remain in Russia and who are sympathetic to the Kremlin's narrative. "I try with all my strength not to scare people that are on the fence, but to bring them towards us instead."

The series in Europe is a far cry from previous tours - even after fighting erupted in 2014 after Ukrainians ousted their Moscow-backed government and the Kremlin annexed Crimea from Ukraine.

After that, she said, Russian artists still performed in Ukraine and there was little practical difference between a gig in Saint Petersburg and Ukraine's now war-scarred city of Kharkiv.

"We could go there and sing in our Russian language, our Russian songs and nobody did anything to us," she said. "People there knew our songs by heart."

The singing by heart, at least, hasn't changed. Hundreds of her fans in Warsaw sang along: Belarusians, Russians and Ukrainians standing shoulder to shoulder.

Concertgoer Liza Daviskiba, a 26-year-old Russian project manager who lives in Finland, said she was surprised to see such crowds turning out for Russian artists.

"There is hope that there won't be this aggression between our people," she said. "I'm so happy to see this kind of initiative. It's a statement that things aren't good in Russia and that we Russians are with Ukrainians."

Like tens of thousands of Russians horrified by events in Ukraine, Monetochka scrambled to leave Russia within days. And like many who fled, she doesn't know when she will go back. In the meantime, the concerts offer a degree of stability.

She derives hope that most of the donations on their concert website, which also go towards helping refugees, come from Russia. And, she said, the shows let her and Alexeyev briefly "forget about the fate of the country."

It hasn't all been smooth sailing and she says she has encountered "anger" from Ukrainians and some Europeans. "They have a right to this," she said.

Check out the video above to see Monetochka perform