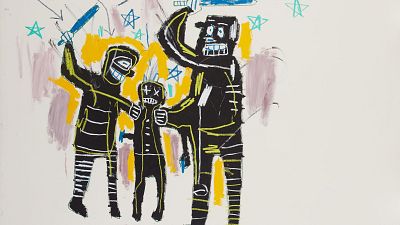 The works of Jean-Michel Basquiat have ended up in the private art collections of celebrities like Yoko Ono and David Bowie, but his sisters felt that the public didn't know much about the personal life of the famed artist who died at the age of 27 in 1988.

"I have an idea that he probably is aware and knows and I hope that he is feeling the love that we put into this," said his sister, Jeanine Heriveaux.

'Jean-Michel Basquiat: King Pleasure' includes 200 pieces of art that have never been viewed in public. The exhibit includes home movies, a report card from when the family lived in Puerto Rico, as well as recreations of their childhood living room and his art studio.

The exhibition is being held at the Starrett-Lehigh Building in West Chelsea New York.

Who was Jean-Michel Basquiat?

Jean-Michel Basquiat began as a graffiti artist around 1977 and within just a few years he was collaborating with the celebrated pop artist Andy Warhol.

His work was heavily influenced by the hip hop and punk music of the time, but also by art's greats including Picasso.

Basquiat's rise to fame was not only down to his talent as an artist, but also thanks to his great charisma.

Since Basquiat's death at the age of 27 from a heroin overdose, his work has steadily increased in value.

In May 2017 a 1982 painting by Basquiat depicting a black skull with red and yellow rivulets, sold for $110.5 million, becoming one of the most expensive paintings ever purchased.

It also set a new record high for an American artist at auction.

There have been exhibitions of his work before but this is the first by the family. Sisters Heriveaux and Lisane Basquiat said their stepmother pushed them to share these pieces with the world.

"One of the things that's different about this exhibition is that there are people who may have spent some time with him, knew him for a few weeks or few months or a few years, and knew him in a very specific point of time," said Lisane Basquiat. "So, we are really the only people that can really put some context around that and give the perspective of our family.

The sisters have never taken on a project of this scale. They started organizing pieces in 2017 but felt that they still needed time. But the murder of George Floyd in 2020 motivated them to get it off the ground.

"It is unfortunate that we are still having this conversation, but hopefully people will understand and get an understanding of what Black people experience on a daily basis," said Heriveaux. "And if it's Jean-Michel's work that they see as that, as that path, then that's beautiful."

Tickets are available here and an end date will be determined by public interest.