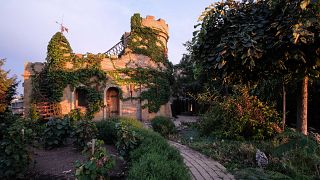 Ukrainian resistance can be found in the most unexpected places right now. Among the more surprising areas is within the country’s wine industry.

“If our army needs help from us, we will help. I don’t know what I can do more,” said Eugene Shneyderis, owner of Beykush Winery in southern Ukraine.

Shaped like a castle and draped in ivy, Beykush would look more at home in the hills of Piedmont, Italy, rather than situated amid wetlands and saltwater lakes.

But now, the bucolic view of the Black Sea shoreline from atop its crenellated walls is blighted by hostile warships, fighting for control of Ochakiv port. Thick, black smoke billows over the vineyard. Ukraine and its wine industry are under siege once more.

“Can I change something? I think, no. I have only two options: to be worried or not be worried,” Shneyderis told Euronews, hours before Vladimir Putin ordered Russian troops to launch a full-scale invasion of Ukraine.

The seeds of resilience were sown in 2014 when Crimea, at the time Ukraine’s main wine region, was annexed by Russia. “There are mountains, there are steppes, there are parts near the sea...For this reason, the best region for winemaking [in Ukraine] is Crimea,” said Shneyderis.

Wineries like Golitsyn in Crimea’s Noviy Svit village are revered throughout Eastern Europe and Russia for their light, Champagne-like wines. Boris Yeltsin was even rumoured to have passed out from drinking in the Golitsyn wine cellars and had to be carried to bed by his bodyguards.

“When Ukraine lost Crimea, it lost more than half of its winemaking industry,” said Shneyderis. While most world nations refuse to accept that Crimea was anything other than Ukrainian, the reality is that the Russian government now reaps profits from the harvest, not Ukraine.

In the years since, it has fallen upon winemakers themselves to make a concerted effort to push Ukrainian wines onto the international market. This has helped to raise the profile of smaller wineries, like Beykush.

“For the last 8 years the winemakers of the mainland of Ukraine have done an incredible job and they won't give up now,” said Victoria Agromakova, CEO of Wine&Spirits Ukraine.

Plans include presenting a new ‘Wines of Ukraine’ brand for the first time this year at the ProWein international wine trade fair in May 2022, in the hope of giving Ukrainian wine broader recognition globally.

“Nothing and no one will stop the development of winemaking in Ukraine,” Agromakova said.

Vine to Table or the Soviet model

One of the areas that is only just starting to receive attention in Ukraine is small-scale, independent farms, where grapes are planted as part of a varied crop and wine is made in limited batches to be sold locally at market.

“Ukrainian wine, it’s a very interesting thing now,” said Shneyderis. “A lot of the people who [make wine in Ukraine] are people from the villages. They don’t speak English, they don’t know how to export, how to show to some wine traders, but they have good ideas with their wine.”

This new focus comes off the back of huge changes in Ukraine’s farming industry. Under the Soviet Union, Ukraine was known as the breadbasket of Europe. But archaic Soviet land ownership laws endured until the summer of last year when the Ukrainian government passed new legislation allowing the buying and selling of farmland to resume for the first time in decades.

“The Soviet model was more industrial, to make a lot of wine, but not expensive...it was not necessary to make fine wines,” said Shneyderis, whose boutique family-run winery focusses more on more finessed reds, whites and roses.

“Maybe 99% of the production of Ukraine is in industrial wineries, it’s not a lot, maybe 10 or 15 wineries who produce around 1 million bottles, with not a high quality. There are some good big wineries, but it’s only one, two, three...it’s still the Soviet model of wineries,” he said.

However, with the invasion by Russia, the future of Ukraine’s wine industry, and indeed Ukraine itself, is now deeply uncertain. The mood from many winemakers is one of defiance, underpinned by a hope that they will be left in peace to make their wines and continue working towards gaining a stronger recognition beyond Ukraine.

“I continue to invest in my wine, it’s what I want. Recently, we make some small hotel near the winery, I paid...one week, two weeks ago, for the construction of a swimming pool in this small hotel. We continue our life. Maybe it’s stupid, I don’t know,” said Shneyderis.

“What we can do? I will help our forces, our armies, I will continue my work. If something happens, okay, I don’t know what we’ll do. Something, we’ll do,” he said. “We will continue our work.”