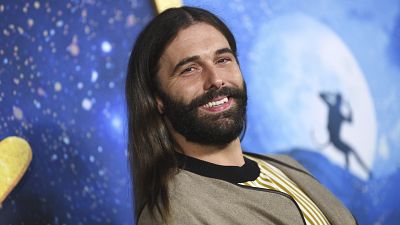 Jonathan Van Ness is set to dig deep in an episode of their upcoming Netflix show “Getting Curious” entitled “Can We Say Bye-Bye To The Binary?”

The episode, shot in the Stonewall Place area of Greenwich Village, New York, will see the “Queer Eye” cast member discuss gender non-conformity in a small group with friend and activist Alok.

The series will see Van Ness trade in their usual hairdressing scissors as he goes on a different quest of discovery each episode.

"I was obviously bullied a lot growing up and I felt such a sense of relief knowing that we really are not alone and that this experience of being gender nonconforming, non-binary and all of us have, you know, fall somewhere unique on that spectrum,” says Van Ness.

“There are as many unique places to be on that spectrum as there are people in the world. It just felt, you know, such togetherness and such community, and that was so sweet," they continue.

What is “Getting Curious” with Jonathan Van Ness about?

Van Ness, already a fan favourite on “Queer Eye” for their eccentric delivery, flamboyant outfits and sensitive, caring nature, is stepping into the new solo venture this year.

“Getting Curious” began as a podcast but is making the leap to TV, with the presenter asking questions on everything from Skyscrapers to bugs.

"The bottom line is, I got to be interested and, like, really curious about the question,” says Van Ness.

“So I think that's always something I'm thinking about is, like, how curious, how passionate am I about this question, and, you know, to find out more?"

Each episode Van Ness speaks to various experts on the chosen topic and breaks up the information with sketches, songs and animations.

As well as ‘Can We Say Bye-Bye to the Binary,” other episodes are titled; "Why is Hair So Major?" "Are Skyscrapers Huge Divas?" and "Are Bugs Gorgeous or Gross?"

There's also an episode on figure-skating, a sport JVN has been fascinated by since he was four-years-old.

He believes the episode, which demonstrates different jumps and explains scoring, comes just in time for the upcoming Winter Olympics.

"Getting Curious With Jonathan Van Ness" arrives on Netflix this Friday 28 January, and JVN's upcoming tour "Imaginary Living Room Olympian" starts in February and will take in the U.K. and U.S.