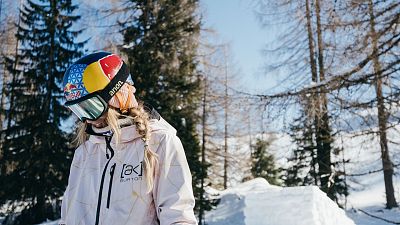 Anna Gasser has become one of the biggest winter sports stars on the planet since she broke onto the snowboarding scene nearly 10 years ago.

She has undoubtedly changed the culture of snowboarding forever - by setting new levels for female snowboarders and attracting more attention towards the sport.

The Austrian prodigy combines artistry and athleticism to perform some of the most audacious tricks ever seen on a snowboard.

A fearless approach to snowboarding

She is a four times 'X Games' champion and won gold at the first Winter Olympics 'big air' event in 2018.

And with the advancement of filmmaking techniques, to better capture the tricks and performances of snowboarders, she has become a worldwide sensation, with millions of views on her social media feeds.

Specialist photography from drone shots, cable cams and ultra high-speed cameras have all helped to show off her incredible feats and bring a whole new audience to snowboarding culture.

Recently for example she was the focus of a high-spec Red Bull documentary called 'The Spark Within' - which tells the story of her rise to fame.

Revolutionising the sport of snowboarding

Gasser competes in both big air and slopestyle - both events known for their spectacular tricks, jumps and high levels of danger.

She is boldly pushing the boundaries of women's professional snowboarding - becoming the first female to land a Cab Triple Underflip and the Cab Double Cork 1260.

“It was men you saw on television. Women were shut out of certain competitions and the women's prize money was less than half that of the men,” explains Gasser.

Gasser has her eyes set on the Beijing Winter Olympics 2022 and is hoping to defend her gold medal status in big air.

Check out the video above to see Anna Gasser take to the slopes, and ramps, of Austria