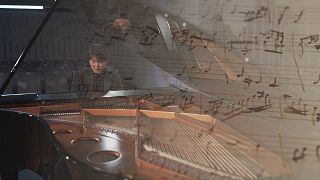 Mozart week 2021 is now underway. The opening concert was performed by Artistic Director, Rolando Villazón, as he took to the stage with the Salzburg Mozarteum Orchestra under the baton of Kery-Lynn Wilson. But the tribute to Mozart this year is marked by an extra special event: the world premiere of a previously unknown piece by the musical prodigy himself. The newly discovered piano solo, entitled Allegro in D - K.626b/16, was played by the world-famous pianist, Seong-Jin Cho in the Great Hall of the Salzburg Mozarteum Foundation. The 94-second recital took place on the 27th of January, an iconic date that marked the 265th anniversary of the composer's birthday.

The manuscript was written by Mozart in the late 18th century, most likely in 1773 whilst he was either ending a visit to Italy or already back in his native town of Salzburg, Austria. He would have been 17 at the time. The Director of Research at the Mozarteum Foundation, Ulrich Leisinger, told us that the "handwriting looks quite unusual for Mozart", but "has his characteristics" and "the score was obviously written very quickly". The paper he used to write it on was not music paper, but normal sheet paper. He drew the lines of the staves himself. It's truly a unique piece.

Where was it all these years?

It is not known how or why, but the manuscript is believed to have gone from the composer's youngest son's estate into the collection of Aloys Fuchs, an amateur musician. After that, it was given away, perhaps by mistake, and lost to the musical community. In the 1880s, it turned up in the possession of an antique book and art dealer in Vienna, eventually being sold at auction in 1899. It is around this time that the piece was noticed because the Köchel catalogue, which keeps a list of Mozart's work, began mentioning it.

"It is absolutely amazing to see the score and to hear the music of a piece that we have not heard before."

It was at this point that the foundation was able to confirm the piece was really an original Mozart. It was published on the same day as its world premiere and represents one of the greatest musical finds in years.

To the best of anyone's knowledge, Seong-Jin Cho, is the first professional musician to have performed the piano solo publically. He says it is "very joyful and delightful and also playful and you can definitely feel that this is written by Mozart, young Mozart, you can feel the pure emotion”. He also describes a jump in the melody that suddenly makes the piece lyrical, a contrast that he really likes.

Seong-Jin Cho was a natural choice for the world premiere of this 'Allegro in D' because he is an extremely accomplished pianist. He is 26 years old and has already won the prestigious XVII International Chopin Piano Competition, a feat he accomplished in 2015. It also makes him the first South Korean ever to win it.

From an incredibly young age, Mozart's genius began to shine through. This is reflected in one of his earliest surviving concert arias, 'Va, dal furor portata'. He composed it when he was just nine. Rolando Villazón, the artistic director of Mozart Week says this aria allows you to "see this young boy, full of youth and ambition and energy". The conductor, Keri-Lynn Wilson, further describes it as a "dramatic piece about 'il furor', his furore" and at this point, "there was something inside him that definitely was a foreshadowing of his future as Don Giovanni, his great dramatic works.”

Mozart Week will be streamed online until the 31st of January. The pandemic has forced the event this year into a digital format. On the menu are various large-scale orchestral concerts, select chamber-music delights and special concert formats with top Mozart performers to illuminate the mythical composer’s body of work. As Rolando Villazón, the Artistic Director says, for this start to the year and as always “Mozart takes us by the hand, walks with us through the difficult times and then always takes us into the light”.