Vladimir Putin's forces have launched an all-out assault to try to encircle Ukrainian troops in the east of the country.

See a summary of latest developments in our blog below and watch the report in the video player above.

That's all from the live blog for tonight. Join us from 0600 CET on Wednesday for more updates.

Soros says Ukraine may be start of World War Three

Billionaire financier George Soros said on Tuesday that Russia's invasion of Ukraine may have been the beginning of World War Three so the best way to preserve free civilisation was for the West to defeat President Vladimir Putin's forces.

Soros, 91, a legendary hedge fund manager who earned fame by betting against the pound in 1992, cast the Ukraine war as part of a broader struggle between open societies and closed societies such as China and Russia which were in the ascent.

"The invasion may have been the beginning of the Third World War and our civilization may not survive it," Soros told Davos, according to a text of his speech released by his office.

"The best and perhaps only way to preserve our civilization is to defeat Putin as soon as possible. That's the bottom line."

Soros said that Putin, who says the "special operation" in Ukraine is going to plan and will achieve all the Kremlin's aims, now believed the invasion was a mistake and was preparing to negotiate a ceasefire.

"But the ceasefire is unattainable because he cannot be trusted," Soros said. "The weaker Putin gets the more unpredictable he becomes."

Soros said the European Union had to understand that Putin could turn off Russian natural gas, which currently accounts for about 40% of Europe's needs, "while it really hurts".

Hungary declared a legal "state of danger" in response to Russia's war in neighbouring Ukraine, the prime minister announced on Tuesday, allowing the right-wing nationalist government to take special measures without the participation of the legislature.

In a video on social media, Prime Minister Viktor Orban said that the war in Ukraine represented "a constant threat to Hungary" which was "putting our physical security at risk and threatening the energy and financial security of our economy and families."

In response, he said, a "war state of danger" would take effect beginning on Wednesday, allowing the government "to respond immediately and protect Hungary and Hungarian families by any means possible."

The move came after Orban's ruling party passed a constitutional amendment on Tuesday allowing for legal states of danger to be declared when armed conflicts, wars or humanitarian disasters were taking place in neighbouring countries.

The special legal order permits the government to enact laws by decree without parliamentary oversight, and permits the temporary suspension of and deviation from existing laws.

Hungary's government implemented similar measures in response to the COVID-19 pandemic to outcry from critics and legal observers, who argued they gave the government authority to rule by decree.

That special legal order was set to expire on June 1.

Orban's government has been accused of eroding democratic freedoms in Hungary since taking power in 2010 and using state resources to cement its power.

Russia's parliament on Tuesday passed a bill giving prosecutors powers to shut foreign media bureaux in Moscow if a Western country has been "unfriendly" to Russian media, following the closure of some Russian state news outlets in the West.

The bill, passed in the first reading by the lower house of parliament, or Duma, also prohibits the distribution of articles or other materials from media that have been closed by the prosecutor's office. It needs to undergo two more readings, be reviewed by the upper house of parliament, and signed by President Vladimir Putin to become law.

The journalists of a media organisation deemed to be an offender under the bill would have their foreign ministry accreditation withdrawn - meaning they could not work in Russia.

The bill was introduced by influential lawmakers, including Andrei Lugovoy, who was charged in absentia by British prosecutors for the 2006 poisoning murder of Alexander Litvinenko. Lugovoy, a former KGB bodyguard, has repeatedly denied the charges.

The new bill adds to the challenges facing foreign media after Russia in March adopted a law which penalized what it termed spreading "fake" news about its army.

Euronews International Correspondent Anelise Borges, reporting from Dnipro, said fighting in the east had intensified since Russian forces took control of the port of Mariupol.

"Since that happened, there seems to be a renewed effort to break through Ukrainian lines of defence all across the Donbas, especially in cities like Sievierodonetsk," she said. 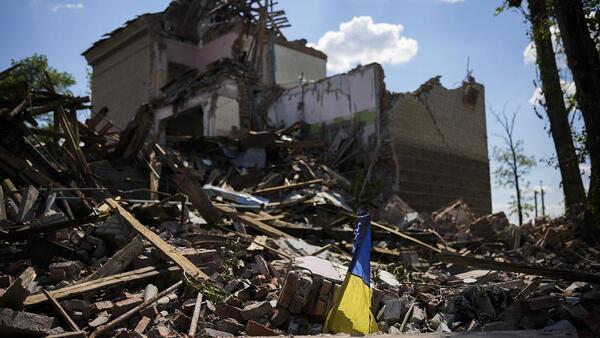 Ukraine war in 'most active phase of full-scale Russian aggression'

Some 154 members of the House of Lords, upper house of the British parliament, have been banned from entering Russia, the country's foreign ministry has announced.

The ministry said the 154 had all "made a direct contribution" to the wide-ranging sanctions imposed on Russian officials by London and aiding "the political isolation of Russia and the destruction of its economy”.

William Hague, a former foreign minister and Conservative Party leader, is among those to have been blacklisted.

More from the European Commission president's interview with Euronews.

Ursula von der Leyen accused Russia of provoking a world food crisis as a result of the invasion of Ukraine, one of the world's leading exporters of wheat, corn, barley and sunflower oil.

Russia has managed to control most of Ukraine's access to the Black Sea, effectively imposing a blockade that prevents Ukrainian ships from bringing food supplies to global markets. The restrictions have dealt a huge blow to the nation's economy and raised the alarm among low-income countries.

"No possibility should be [left] unused to have a dialogue with Russia" to solve the situation, said von der Leyen. "It cannot be that Russia is already responsible with the war for this food crisis, but that now it is knowingly blocking the Black Sea and thus responsible for the starvation of millions of people."

"There are discussions with Russia, so that's good, in unblocking the Black Sea," she added.

Kyiv has asked the EU and the G7 to set up green corridors to allow food supplies to leave Ukraine via alternative land routes. The country is currently storing around 40 million tonnes of grain, half of which must be exported by the end of July.

"We're working hard with the Ukrainians to help them bring out the wheat for example, through trucks or trains, and other transport modes. This is not easy but we're working on all fronts," von der Leyen said.

The Commission chief plans to host an event on food security with President Abdel Fattah el-Sisi of Egypt, one of the most exposed countries to the food disruption caused by the war.

Eighty-two percent of Ukrainians believe that Ukraine should not sign away any of its territories as part of a peace deal with Russia under any circumstances, according to a new survey by one of the country's top pollsters.

In the poll conducted by the Kyiv International Institute of Sociology between May 13-18 and released on Tuesday, 82% of respondents said they did not support territorial concessions, even if it prolonged the war and increased the threat to Ukraine's independence.

Russia launched a full-scale invasion of Ukraine on Feb. 24, a move Moscow calls a special military operation to "demilitarise" Ukraine.

Ten percent of the 2,000 people surveyed found it acceptable for Ukraine to concede territory to achieve peace, while eight percent were undecided. According to the poll, 77% of Ukrainians living in Russian-occupied territory opposed any land concessions.

Ukraine’s government has repeatedly stated that it does not intend to make any territorial concessions to Russia and has said it is not currently seeking a ceasefire despite calls from European leaders, including German Chancellor Olaf Scholz and Italian Prime Minister Mario Draghi.

In an interview with Reuters on Saturday, Ukrainian negotiator Mykhailo Podolyak said that any ceasefire at present would simply delay further fighting.