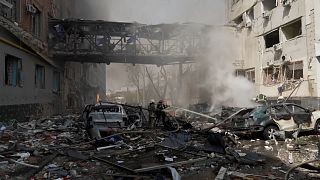 Ukrainian authorities said Russian forces hit a residential area in the city with rockets, killing at least one person and injuring 18 others.

Firefighters worked to put out flames caused by the strike and helped evacuate 65 people from burning residential buildings, officials said.

Amid burned cars and debris, there were bloodied people on the streets, with ambulances arriving to treat them.