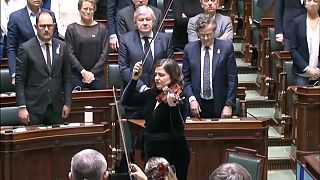 Zelenskyy received a standing ovation after making his speech, despite pointing to criticism toward the continued import of Russian diamonds into Antwerp.

“New aid is on the way, Belgium remains by your side,” said Belgian Prime Minister Alexander De Croo on Thursday.

Prior to Zelenskyy’s speech, a violinist took to the floor before Belgian lawmakers and performed a moving rendition of the Ukrainian national anthem.