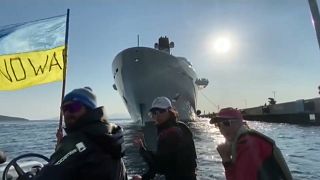 Turkey's private NTV television said the Bermuda-flagged luxury yacht "Solaris" docked at the port in Turkey -which has not joined sanctions on Russia- fter departing Montenegro.

A group of Ukrainians, carrying Ukrainian flags with the words "No War" emblazoned on them, boarded a small motor boat and tried to prevent the yacht from docking, the Sozcu newspaper reported.

It was not known if Abramovich was aboard or if the yacht has been moved to Turkey to avoid sanctions.

Last week, the European Union imposed sanctions on Abramovich as it updated a list of individuals facing asset freezes and travel bans over their role in the Russian invasion of Ukraine.

Abramovich had already been punished in Britain.

NATO-member Turkey has close ties to both Russia and Ukraine.

It has criticized Moscow's invasion of Ukraine but has also positioned itself as a neutral party trying to mediate between the two.

It has closed the Turkish Straits connecting the Black Sea to the Mediterranean to most Russian warships but has not imposed sanctions on Russia or shut down its airspace to Russian flights.

Last week, Abramovich arrived in Istanbul from Jerusalem aboard his private jet before departing for Moscow the next morning.