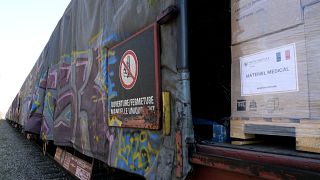 A goods train with humanitarian aid for Ukrainian refugees in Romania left Strasbourg on Wednesday for the eastern part of the country bordering Ukraine, "a first" in France, according to the Civil Protection, which is managing the operation.

Strasbourg is home to the national logistics platform for aid to Ukraine of the Civil Protection, from which "1,171 tonnes of donations from all over France" have already left for Poland, notably via "three convoys of fifteen lorries", according to a spokeswoman.

The SNCF has provided the goods train "free of charge", a spokeswoman for the railway company said.

The train, which is due to arrive in a few days' time in Tulcea, a city in eastern Romania near the Black Sea, will be pulled initially by Fret SNCF and then by Germany's Deutsche Bahn.