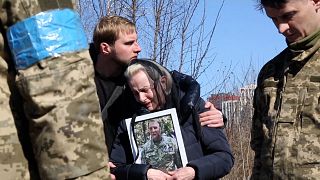 Funeral of a Ukrainian fighter

It took a Ukrainian family nearly a month to recover the remains of Yuriy Shabadash who - at the age of 59 - was killed in combat near the city of Irpin.

His son Artem now wants revenge. And says he has no other option but to fight this war. "We didn’t start it but we will finish it. Russians can’t fight in close combat. Just remember, they are cowards. Do you hear this right now? These sirens… this means they again started bombing us."

This Kyiv municipal cemetery bears witness to the current escalation of a war many here consider has started not last month but eight years ago, when Russia annexed Crimea and began supporting rebels in the east

Since then, over 14,000 people have died, according to the Ukrainian government.