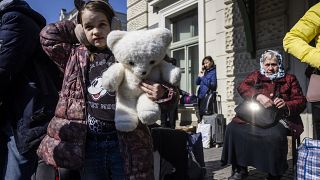 Ukrainian refugees board buses and trains to European destinations

Refugees from Ukraine continued to arrive in Poland, many of them hoping for a new start for their children, as Russia's invasion entered its fourth week.

"We will stay here now in Poland, for the time being" she said at Przemysl station near the Polish-Ukrainian border, now a hub for refugees.

"We will try to find a job, put children into school, and we will try and live here."

Another refugee at the station, Olga Bezdetko, also from Kharkiv, said she had to leave for the safety of her children.

"Children can't go to school and they have to have an education," she said.

"We decided to try here. It is hard, of course."

Snizana Cherevko, a refugee from Zhitomyr, said that schools and kindergartens were bombed in her area.

She said that she would stay in Poland for a while as she had no other place to go but she was hoping to return to her country once the war ended.

Maria Sibel fled Kyiv region alongside her 9-year-old son Vanya after she experienced a two-week occupation by Russian soldiers in her area.

She described how she escaped the area on foot to avoid triggering mines in a rigged damaged bridge.

"I miss my friends a lot, basketball especially because they bombed it (the pitch)." her son Vanya said.

Neither he nor his mother know what their future holds but he said that he was hoping to go to school.

Since the beginning of the war, more than 2 million Ukrainians have entered Poland.