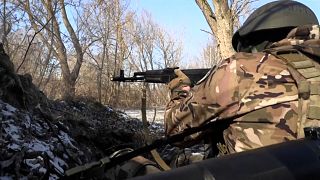 Ukrainian soldiers attempted to regain control of a village near Kyiv on Thursday as they engaged in fighting with Russian troops, RFE (Radio Free Europe) reported.

Gunfire and explosions rang out through the wooded area near the settlement as forces were seen by an RFE journalist approaching the village on foot.

The group can be seen carrying RPGs and anti-tank weaponry with them.