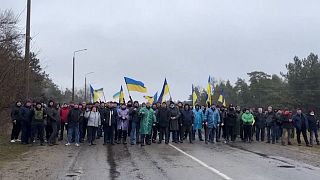 Residents of Ukraine's southeast city of Enerhodar, the home of Europe's largest nuclear power plant, were blocking the entrance to prevent Russian troops from gaining access on Thursday, March 3.

Video footage shared by Enerhodar's City Council showed people en masse standing on the street and blocking the entrance to the city.

Residents had also erected barricades along the way using cars and tires.

According to Enerhodar's Mayor Dmytro Orlov, units of self-defence, together with the employees of the nuclear plant and city residents, are on a round the clock watch to protect the city.