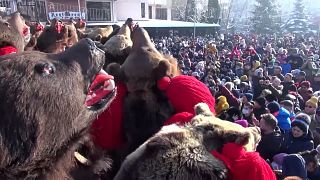 Romanians dressed as bears try to ward off evil

The drumbeats start early in the morning, heralding the arrival of hundreds of people who descend on the northern Romanian city of Comanesti dressed as bears, in full body costumes made from real fur, with the heads attached.

It's a tradition that originated in pre-Christian times, when dancers wearing colored costumes or animal furs went from house to house in villages, singing and dancing to ward off evil.

A bear costume for an adult, with the head included, weighs up to 40 kilograms and costs up to 2,000 euros.