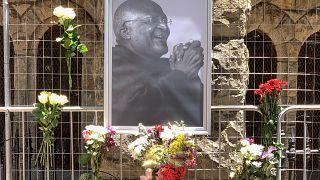 Flowers at Cape Town cathedral in memory of Tutu

South Africa began a week of mourning events for anti-apartheid icon Archbishop Desmond Tutu, described as the country's moral compass, on Monday as tributes poured in from across the world for the outspoken Nobel peace laureate.

Tutu worked passionately, tirelessly and non-violently to tear down apartheid - South Africa’s brutal, decades-long regime of oppression against its Black majority that only ended in 1994.

His funeral will be held on January 1 at Cape Town's St. George's Cathedral, his former parish, his foundation said in a statement.