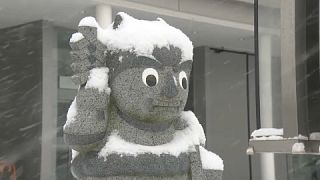 Weather officials are warning of heavy snow in areas along the Sea of Japan, and are urging people there to refrain from non-essential outings.

The Japan Meteorological Agency says a severe cold air mass is flowing over the country, bringing strong winds and snow. Officials say snowfall is intensifying on Sunday, especially in a wide area from northern to western parts of Japan.

The cold air mass will likely move to the Pacific side of western Japan. It could bring snow to urban areas of the Kansai and Tokai regions, as well as the flatlands of the Shikoku and Kyushu regions.

Winds are also expected to intensify across wide areas.

The Meteorological Agency is warning that heavy snow could disrupt traffic and trigger avalanches. It also says snow accumulating on power cables could cause blackouts.

The rough weather has affected public transportation. More than 100 domestic flights have been canceled. Some railway services are suspended.