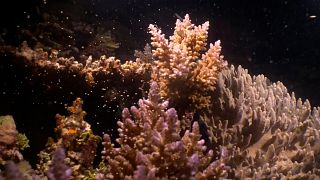 Scientists on Tuesday night recorded the corals fertilizing billions of offspring by casting sperm and eggs into the Pacific Ocean off the Queensland state coastal city of Cairns. The spawning event lasts for two or three days.

Gareth Phillips, a marine scientist with Reef Teach, a tourism and educational business, is studying the spawning as part of a project to monitor the reef's health.

He said the event was "absolutely amazing."