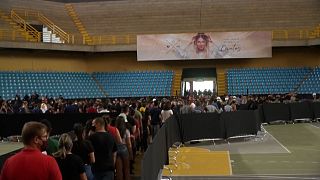 Thousands of people flooded the hometown of late Brazilian country music star Marilia Mendonca Saturday, paying an emotional tribute to the beloved songstress of sorrow and strong women after she was killed in a plane crash at age 26.

Mendonca, a Latin Grammy-winning superstar of Brazilian "sertanejo" music, died with four other people Friday when a small plane carrying her to a concert crashed in the southeastern state of Minas Gerais.

Her body was flown Saturday to the central city of Goiania, her home, where huge crowds of distraught fans lined up to file past her white-lined casket before she was laid to rest.

Known for her soaring voice and heartrending songs, Mendonca managed to break into a country music scene long dominated by men and machismo. She was a leading figure in a burgeoning sub-genre known as "feminejo," or sertanejo music by women.