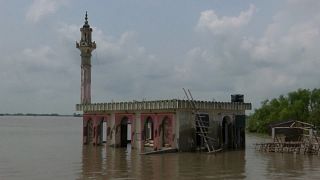 Bangladesh, the low-lying delta nation, is particularly vulnerable to flooding and extreme weather. As cyclones and tidal surges hit its coastal regions, agriculture is being lost and people are being forced to abandon their lands.

In northwestern Bangladesh, the village of Protab Nagar has an unusual type of mosque: a praying hall on a boat. After all the mosques were devoured by water, villagers were forced to find a floating solution. Year after year, devastating floods break through the mud embankments, washing away homes and crops.

For those who live on the water's edge, there is no escape.

In neighbouring village Bonnotola, Abdus Sattar's home of 40 years has been water-logged following breaches of the flood protection embankments and intrusion of saline water during high tides.

He uses a makeshift bamboo bridge to cross the house.

Sattar is worried that his family members will have to leave the village one day as there will be no land left to cultivate and no water to drink.

Many of those made homeless by flooding and crop failures in coastal Bangladesh have fled to Dhaka's overcrowded slum areas, living precariously on menial work.