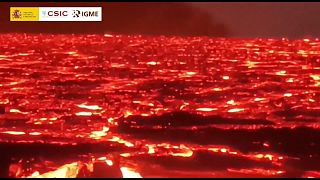 Lava cascading from the La Palma volcano has threatened other structures by reaching a new urban area on the Spanish island, including a gas station in the La Laguna neighborhood.

The lava flow had been heading toward the neighborhood for a few days, which led to its evacuation last week, according to media reports.

As it continues, it could reach the center of the neighborhood where there is a school, a church and a pharmacy.

Several earthquakes shook La Palma as the ongoing eruption showed no signs of slowing, according to scientists with the archipelago's volcanic risk prevention plan (Pelvoca).