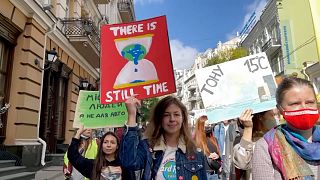 Hundreds of people participated in a climate march in Kyiv Sunday to demand more effort from the government to combat climate change.

The activists carried banners and flags and led chants through the center of Kyiv toward the parliament building.

Protesters called on authorities to increase funding in the state budget for measures to reduce greenhouse gas emissions, adapt to climate change and other environmental measures.

COP26, the follow-on conference after the Paris climate accord of 2015, aims to keep the increase in average temperatures worldwide "well below" 2 degrees Celsius (3.6 degrees Fahrenheit), compared with pre-industrial levels.

Scientists say that any rise in global temperatures beyond 2 degrees Celsius could have a devastating impact on large parts of the world, raising sea levels, stoking tropical storms and worsening droughts and floods.