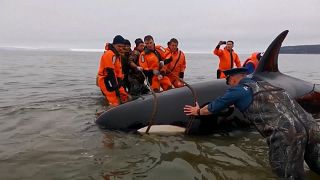 A baby killer whale that had been stranded in Russia's Far East, was rescued, footage from Russian State TV RU-RTR showed.

The rescue took place in the Magadan region, after the killer whale was left stranded when a low tide occurred in the Gertner Bay.

Even though the whale was relatively small, it couldn't manage to go back into the sea on its own.

For several hours rescuers and volunteers poured water on the killer whale to keep it from going dry, until the orca managed to swim back into the open water.

Adult killer whales can reach a length of eight meters.