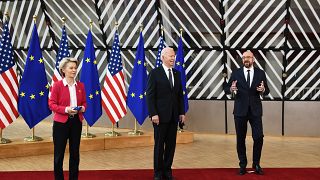 The EU–US Summit takes place in Brussels on Tuesday, 15 June.

The delegation of the United States is led by the US President Joe Biden.

Biden is looking to rebuild the relationship after former President Donald Trump’s fierce criticism of the EU, with a discussion of Trump-era steel and aluminium tariffs on the agenda.