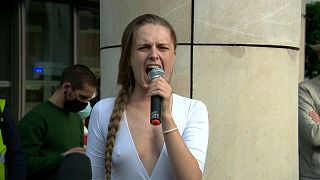 Protasevich was detained by Belarus authorities on Sunday after a Ryanair flight from Greece to Lithuania had been diverted to Minsk due to an alleged bomb threat. The blogger is a co-founder of the NEXTA Telegram channel which was one of the few sources of constant news on opposition protests after the presidential elections.

While some demonstrators fear the arrest of Protasevich has emboldened Lukashenko, others hope it is the lowest point after which the international community will finally take decisive actions.