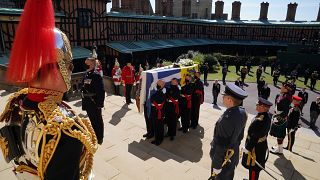 Queen Elizabeth II and other members of Britain's royal family joined a procession at Windsor Castle ahead of the funeral for Prince Philip.

Prince Philip, the Duke of Edinburgh, who was consort to Queen Elizabeth II for 73 years, died on April 9th, just two months shy of his 100th birthday.

His coffin, draped in his personal standard and topped with a wreath of flowers and his naval cap and sword arrived at St. George’s Chapel inside Windsor Castle, accompanied by the Queen and senior royals as it was carried on a specially adapted Land Rover.

Only 30 close family members and friends will attend the service, amid nationwide restrictions designed to slow the spread of COVID-19.