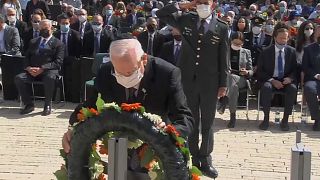 Israelis stood in silence on Thursday as a two-minute siren wailed across the country in remembrance of the Holocaust's 6 million Jewish victims.

Public buses and cars stopped on the streets and highways, and pedestrians stood in place in memory of those killed in the Nazi genocide.

The annual memorial is one of the most somber days in the Israeli calendar, marking the anniversary of the 1943 Warsaw Ghetto uprising, the most significant act of Jewish resistance against Nazi Germany during the Holocaust.