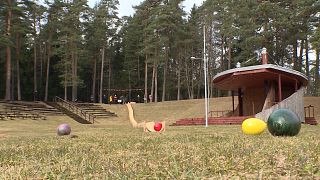 A small town in northwestern Lithuania has modified the traditional Easter egg-roll pastime by increasing the size of the tools involved. As quarantine restrictions prohibit indoor meetings between households, a culture center in Tirksliai constructed a 59-meter-long bed on the open-air local festival grounds. The usual wooden beds, often decorated with intricate carvings, are less than a meter long. The wooden eggs weighing 2 to 7 kilograms are also a little larger than the chicken eggs usually used for the Easter tradition. The entire construction which took three weeks to put together is 14 meters longer than the previous Lithuanian record set in 2007.

The youngest elephant at the Zoological Society of London (ZSL) Whipsnade Zoo enjoyed some Easter treats this week, laid out by her keepers. “Each of the huge, colourful eggs hidden by her keepers was in fact a giant watermelon, her favourite treat, decorated with edible paint,” the ZSL said in a post. Four-year-old Elizabeth is the youngest of the Zoo’s herd of endangered Asian elephants.

The lemurs at Oregon Zoo were seen enjoying some tasty spring treats this week in the form of bright pink camelia flowers. “Snacks are blooming,” the zoo said in a post, adding that the lemurs enjoy eating all parts of the flowers.