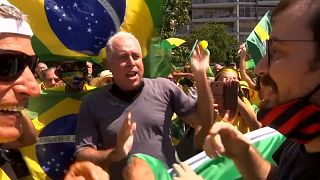 Minor scuffles broke out in Rio de Janeiro on Wednesday as supporters of President Jair Bolsonaro clashed with opponents at a public demonstration held on the anniversary of the country's military coup.

Bolsonaro's supporters waved large Brazilian flags as they gathered in front of Copacabana beach to show their support for the right-wing president who, as a former army captain, repeatedly praised Brazil's 1964-1985 military regime.